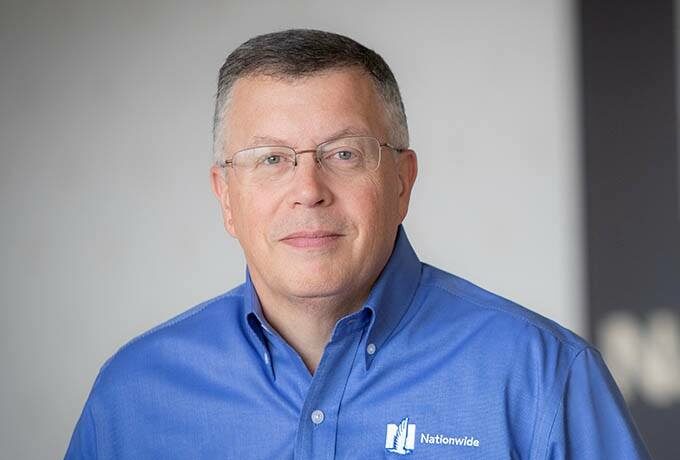 Kirt Walker is chief executive officer of Nationwide. He was elected to this position in 2019, and in this role also serves as a member of the Nationwide Board of Directors.

Kirt initially joined the Nationwide family of companies in 1986. Prior to being elected CEO, he served for 10 years as President and Chief Operating Officer of Nationwide Financial.

During his first 23 years, he served in various leadership positions within the company’s Property and Casualty business, including President and COO of Nationwide Insurance and President of Allied Insurance, Nationwide’s former independent agency subsidiary.

Kirt’s leadership philosophy focuses on “The Four Ps”: People, Planning, Performance and Partnerships. This philosophy extends to driving an engaged, caring culture of associates that leads to better solutions for customers and other stakeholders.

Kirt is a graduate of Iowa State University where he earned a Bachelor of Arts degree in management. He also holds a Master of Science in management with an emphasis in leadership degree from The American College.

Kirt advocates for the financial protection and security of American families, workers and businesses by serving as a board member for the Association of Ohio Life Insurance Companies and the American Institute for Chartered Property Casualty Underwriters.

He is passionate about the community in which he works and lives. He serves on the American Red Cross Board of Governors and the Columbus State Community College Board of Trustees. Kirt previously served as a board member for the American Council of Life Insurers, Mid-Ohio Foodbank, American Red Cross of Greater Columbus, White Castle restaurant company, the New Albany Foundation, the Greater Des Moines Partnership and as a trustee for Grand View College in Des Moines.

Past honors for his community involvement include being named CEO of the Year by Des Moines Business Journal and an Honored Ally by Stonewall Columbus, Central Ohio’s leading LGBTQ organization.

A native of Irvington, Iowa, Kirt was raised on a Century Farm, instilling the values of hard work and community responsibility that he carries forth today. His favorite pastimes include spending time with family, reading and rooting for the Cyclones.

Articles by this author