Equity markets touched record highs as of February 19, 2020. But since then, markets have collapsed, with the S&P 500®  entering a correction in just six trading sessions. The 4.4% decline on Thursday was the worst day since 2011, and the six-day correction was the fastest on record. Despite a painful week with a total of $3.4 trillion in market value being erased, the S&P 500®  has still more than quadrupled since the lows of the financial crisis.

The S&P 500®  Index has experienced 26 corrections of 10% or more since World War II, averaging a decline of 14% over four months, and has taken an average of four months to recover. This excludes the 12 bear markets with losses of 20% or more over that period, averaging a decline of 30% over 14 months and taking 24 months to recover. The most recent correction occurred between September and December of 2018 (just under 20%) on concern surrounding the trade war. Each of these corrections reversed sharply and were (in hindsight) attractive buying opportunities because the downturn was based on fear rather than fundamental decline.

It is too early to assess if this environment is fear-based or fundamental. If the coronavirus outbreak stabilizes and the economic contagion is limited, equity markets will likely rebound quickly. If the economic reverberations are pronounced and protracted, resulting in a global recession, the selloff could be extended. 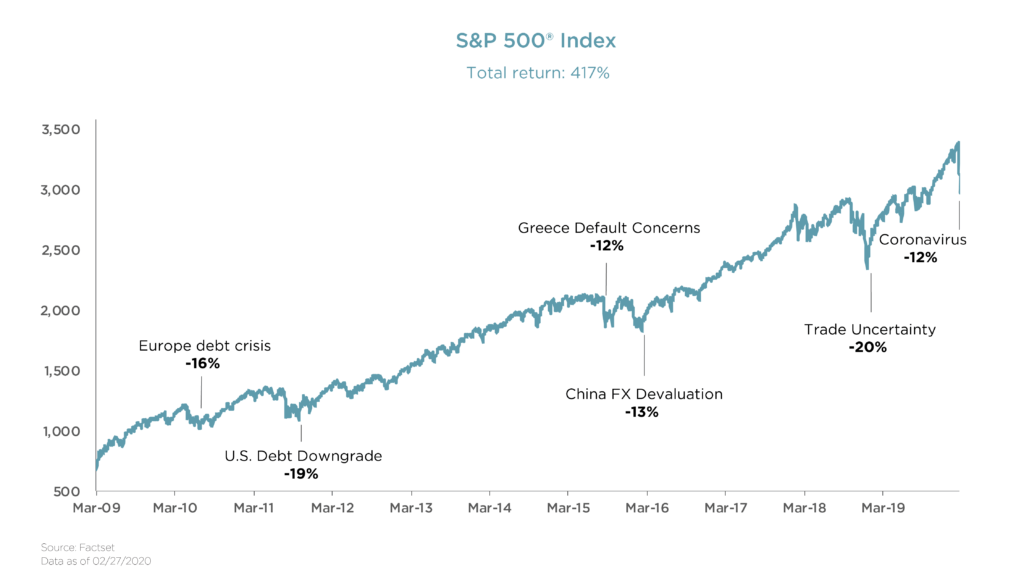