Better watch out for the “Santa Claus rally”

The “Santa Claus rally” describes the stock market’s tendency to rise in the year’s final week and the first two trading days of the new year. Although the Santa Claus rally might sound like some mythical investment narrative predicated on investor nostalgia, there is data to support the claim. For example, Dow Jones Market Data shows that the Dow Jones Industrial Average, S&P 500®, and Russell 2000® indices have closed higher in December more often than in any other month. Moreover, the Russell 2000 has seen positive performance in December 83% of the time since 1987.

Many market observers also note that volatility falls toward the end of the year, and the S&P tends to outperform heading into the last three months of the year. A review of our macroeconomic “naughty” and “nice” list may help investors determine whether the Santa Claus rally will likely arrive this year. 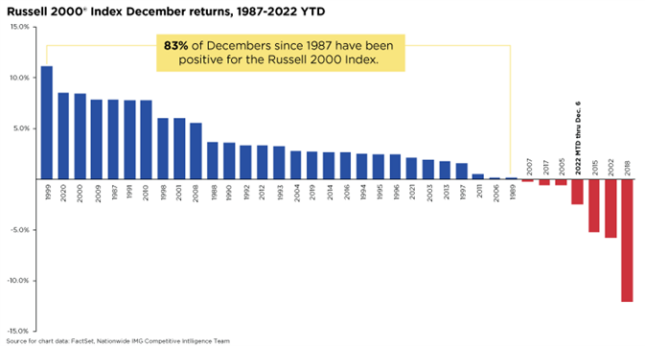 On the naughty list are several economic variables that could hinder a potential stock market rally. First, decades-high inflation has hurt purchasing power, reducing income value and likely causing household debt to soar at its fastest pace in 15 years. Second, rising interest rates and reduced affordability has hit the U.S. housing market, where the median housing payment as a percentage of median income has increased to its highest level on record. Third, a hawkish Federal Reserve that has raised interest rates at the fastest pace since the 1980s led to $22 trillion in losses for equities, bonds, and real estate. Fourth, the global pandemic has influenced the labor market, leading to higher average hourly earnings, likely leading the Fed to continue holding interest rates in “restrictive” territory. Lastly, higher levels of nominal revenue growth, driven by inflation, can mask the impact of recessionary pressures that hurt company operating leverage, ultimately acting as a headwind for earnings growth in Q4 2022.

On the nice list, however, several economic variables could support a Santa Claus rally. First, corporate and consumer balance sheets are less exposed to credit and leverage risk than in prior cycles, which could mitigate earnings risk considerably. Second, the labor market is also the strongest in decades, potentially blunting recessionary concerns. Over the first eleven months of 2022, non-farm payrolls grew by an average of 392,000 jobs per month. Third, capital expenditures, or core durable goods orders, continue to show strength and could act as a tailwind to offset any macroeconomic weakness or reduce aggregate demand. Fourth, supply-chain bottlenecks are easing as pricing pressures abate. Further, port logistics appear to be unclogging, and wholesale prices for transport are diminishing. Finally, expected returns for cash and short-term Treasury bills now offer savers an attractive alternative to equities, allowing consumers to build their emergency savings fund.

Overall, the Santa Claus rally might depend on a balance of factors on the naughty and nice lists. While economic variables like inflation and interest rates may hinder a potential rally, improving supply chains and resilient corporate balance sheets may lead to market growth. Remember, it’s impossible to predict precisely when or if a Santa Claus rally will occur. Therefore, staying invested over the long term is essential.