Is central bank support coming to an end? 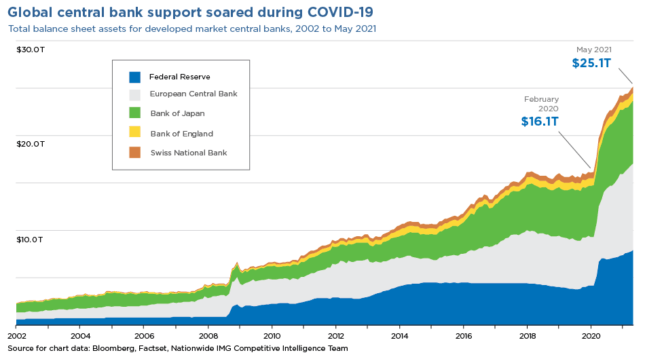 One undeniable factor in the resilience of global capital markets over the past 15 months has been aggressive support from developed market central banks. Much attention has focused on the banks’ commitment to low interest rates, with the Federal Reserve, European Central Bank and Bank of Japan holding monetary policy rates effectively at zero. With no room for policymakers to move rates lower, the central banks embarked on aggressive bond-buying programs to add liquidity to the global financial system and keep longer-term interest rates low. The consolidated balance sheets of the developed market central banks have jumped by 56% from pre-pandemic levels to more than $25 trillion. (See chart above.) That’s equivalent to 57% of the combined GDP of these countries in 2020. This spike is reminiscent of 55% balance sheet increase during the 2008 financial crisis, but at that time the cumulative amount was roughly one-quarter of the current level.

The recent rapid acceleration in the global economy has many wondering about the sustainability of the current pace of quantitative easing. A “taper tantrum” was partially to blame for the sharp rise in the 10-year Treasury rate in Q1, even though Fed officials have been transparent about the need to dial down asset purchases and the impact of the eventual slowdown (or elimination) of balance sheet growth is unknown. During the last “taper tantrum” in 2013, the 10-year Treasury yield rose from 1.9% on May 23—the day then-chair Ben Bernanke hinted at curtailing Fed asset purchases—to 2.9% by September. However, as the actual tapering developed, 10-year Treasury rates settled back below 1.5% by 2016. Moreover, the S&P 500® Index initially lost 5% of its value over the first month of the 2013 taper tantrum, but quickly recovered to gain 13% return from date of the tapering hint to the end of the year. Removal of a key driver of central bank stimulus will likely cause volatility in the bond and equity markets, but history shows the long-term impact is unlikely to be as extreme as many bears fear.