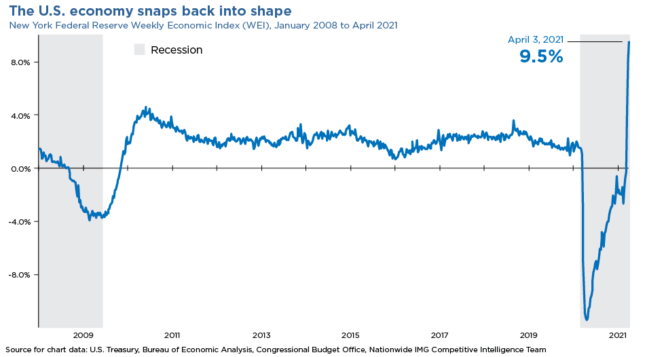 The New York Federal Reserve calculates a Weekly Economic Index (WEI), which tracks 10 daily and weekly indicators of real economic activity, scaled to align with GDP growth. The most recent reading was 9.5%, nearly double the previous record from 2010 when the economy emerged from the financial crisis. The acceleration resulted from increases in electricity output, fuel sales and rail traffic, all indicators of stronger activity. Additionally, unemployment claims continued to fall compared with a year ago. Because the WEI measures changes over a 52-week period, the strong increase also reflects the sharp deterioration in economic conditions this time last year.

Many economists are currently projecting strong activity; the latest consensus estimate for Q1 growth is 4.9% with the full year estimated at 6.0%. Unprecedented fiscal and monetary stimulus is expected to drive much of this growth. However, it’s more difficult to measure pent-up demand among consumers and the scope of the bounce that will occur when conditions become more normal. The personal savings rate has averaged 18% of disposable personal income over the past year, more than double the 7% average since the financial crisis, as much of the economy was locked down and many chose to save their stimulus checks. If consumers begin to aggressively spend some of this “dry powder,” growth could surprise to the upside.