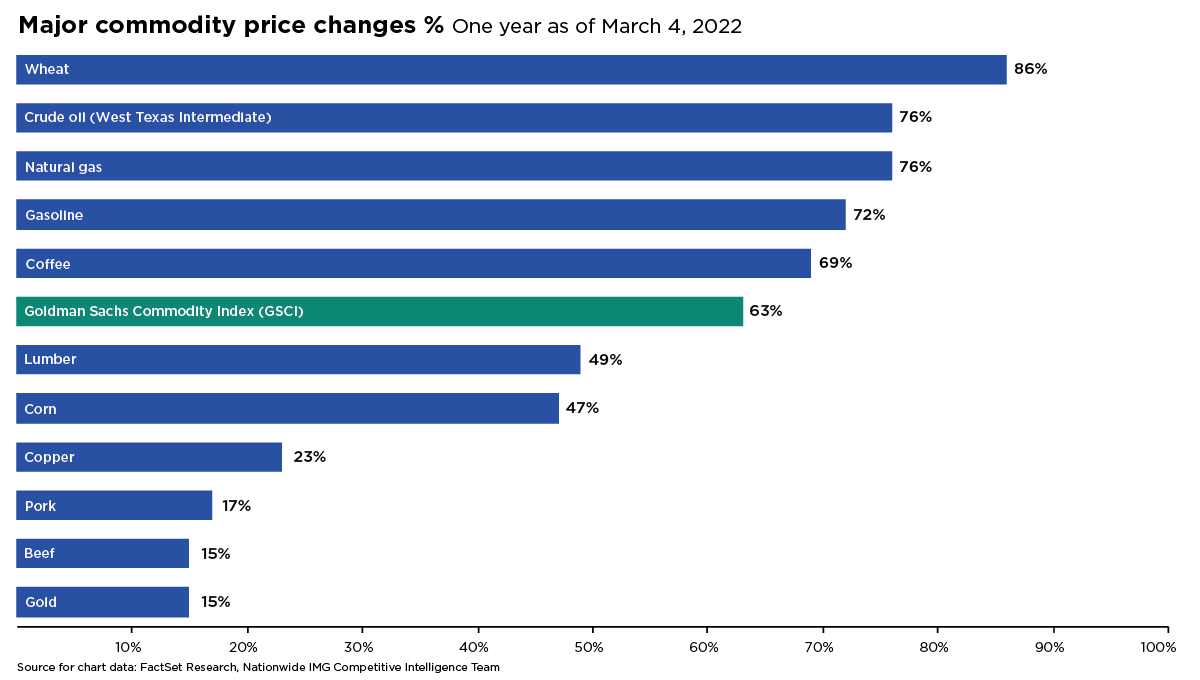 Since war erupted in Ukraine on February 24th and the international community levied economic sanctions on Russia, commodity prices have climbed to their highest levels since the financial crisis of 2007-09. The rise in prices is directly tied to Russia’s military invasion, as Russia is responsible for 10% of global oil production and more than one-third of Europe’s natural gas. Moreover, the Black Sea (which borders both Russia and Ukraine, as well as NATO members Romania, Bulgaria, and Turkey) accounts for roughly 30% of global wheat exports. The S&P Goldman Sachs Commodity Index (GSCI) is up nearly 40% year-to-date and up 63% from a year ago. The table above details the surge in individual commodity prices, led by an 86% jump in wheat and a 76% rise in oil prices.

This surge in prices will have substantial implications for the economy. The Bureau of Labor Statistics releases the February look at Consumer Price Inflation (CPI) next Thursday (March 10.) The consensus estimate is a 7.8% jump in inflation from a year ago of 1.7%, up from 7.5% in January. Price pressures are likely to come from transportation (new and used cars), food, and energy, which together account for over one-third of the CPI calculation. Another third comes from shelter, which is up just 4% over since last January despite a 15% gain in existing home prices; the nuance of the shelter CPI calculation tends to lag the impact.

Inflation pressure has already impacted consumer confidence, with the University of Michigan’s reading on consumer sentiment at its lowest level since 2011. This has not hurt consumer spending in other areas, largely because of retained savings from stimulus programs during the pandemic. However, high housing, energy, and food prices will eventually crowd out other discretionary purchases, particularly for low- and middle-income earners. High commodity prices will also pressure margins for companies, potentially limiting earnings growth.

Where does the bear market go next?

After a weak quarter for stocks and bonds, what’s next for the future direction of the market?