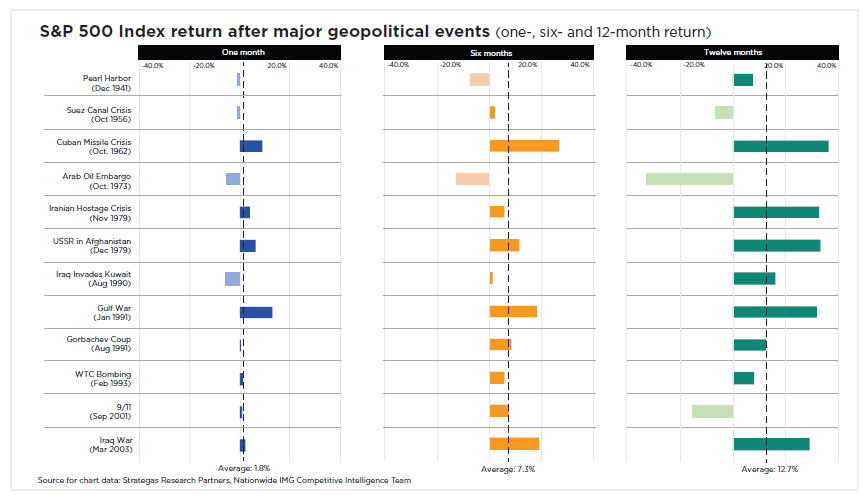 Back in 1810, London financier Nathan Rothschild reportedly said, “Buy on the sound of cannons, sell on the sound of trumpets.” Given the market’s recent spell of weakness and volatility on the news of Russia’s invasion of Ukraine – the first invasion of a European sovereign state by another since World War II — it’s prudent to look back at past periods of geopolitical stress and see how financial markets reacted in the months that followed.

Interestingly, geopolitical shocks have not had a meaningful or lasting impact on the stock market. Investors tend to overreact in the immediate wake of these events and stocks are often choppy for the next month or two. But over a longer period of 12 months following major geopolitical events, market returns are in line with historical averages.

To explore this trend in detail, let’s look back at the major geopolitical events from the start of World War II (at least from the U.S. perspective to Pearl Harbor). In the month following these major events, the S&P 500® Index managed to gain 1.8% on average. (See chart above.) The worst month was after the Iraqi invasion of Kuwait, a loss of 6.1% in August 1990, while the best month occurred in the subsequent Gulf War, a 13% gain in January 1991. The average S&P 500 return six months after these events was 7.2%. Twelve months later, the average return was 12.7%. Volatility has been elevated during these periods, with an average absolute change in the index of 22%.

Returning to the present, the current economic environment is healthy, and growth may be strong enough to weather any pressure from the conflict in Ukraine. The current consensus estimate for 2022 GDP growth is 3.8%, followed by 2.4% in 2023. Both estimates are well above the average pace of GDP growth since the financial crisis. If the economy can withstand the stress and avoid a recession, patience during this period of stress will likely be rewarded.

From a market perspective, the year began with elevated expectations among investors, leaving the market vulnerable to a pullback. To a degree, this is a sell-off in search of a reason and Russia’s aggressive action was enough to spark a correction (a drop of at least 10% from the recent market peak.) On average, stock markets produce more than one 10% correction per year. For this downturn, investors had been lulled to sleep by last year’s strong-and-steady gains. The maximum drawdown we saw in the S&P 500 in 2021 was under 5%.

Expectations for Federal Reserve rate actions are beginning to ease with the likelihood of a half-point rate hike at the Fed’s March meeting (as measured by Fed funds futures) falling from over-90% to under-10% today. This kind of bond market volatility is a clear indication of investor uncertainty. Long-term interest rates have come down from recent highs due to a flight to quality with the yield curve getting flatter. The spike in commodity prices bears watching, as that will keep upward pressure on consumer and producer prices. Plus, a sharp spike in inflation can potentially hurt consumer confidence and spending, as well as corporate profit margins.

All eyes will stay on Ukraine for the time being, even though the fog of uncertainty makes it difficult for investors to make informed decisions. Once we get past the current crisis, focus can return to the improving fundamental backdrop. Economic activity is picking up again as Omicron recedes from the picture. Q4 corporate earnings were impressive as companies proved capable of offsetting input cost pressures with price increases, producing higher margins and earnings that generally beat analyst estimates. Given the current expectation for Q1 earnings growth near 10% and a forward price/earnings ratio for the S&P 500 at 18.5 — the lowest level since April 2020 — the potential exists for a resumption of equity market growth.

But it will be key for investors to avoid emotional investment decisions with all the tumult in the global market. It’s important to stay informed and vigilant, but not to let fear or anxiety lead you astray from your long-term objectives. These geopolitical events are fast-moving and hard to model for in an investment strategy, but history shows they haven’t had a lasting impact from an investment standpoint. Discipline and patience are recommended in the near term, at least until we get greater clarity on global events and investors can return their focus to economic fundamentals.

Where does the bear market go next?

After a weak quarter for stocks and bonds, what’s next for the future direction of the market?