The University of Michigan Index of Consumer Sentiment slipped to 77.0 in November, down from 81.8 in the previous month, largely in reaction to the rebound in national coronavirus cases and regional actions to stem the surge. A secondary factor in the drop in confidence is the emotional reaction to the recent presidential election.

Historically, a shift in party control of the White House or Congress has made little difference in market performance. But consumer confidence is a different story. After the 2008 election, Democrats surveyed reported a jump in confidence after Obama’s victory, while Republicans adopted a more sour outlook. After the 2016 election, those sentiments flipped; Trump’s electoral win caused Republican confidence to soar, while confidence among Democrats began to slide. (See accompanying chart.) 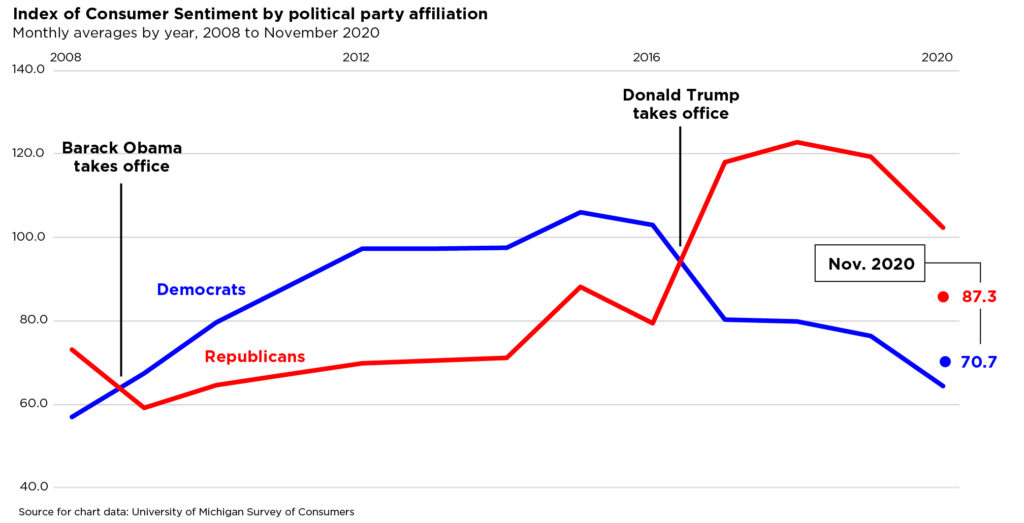 We may be seeing early signs of a similiar shift in confidence happening in the months to come. The November consumer sentiment survey saw Republican confidence slip to 87.3, a 10-point plunge from the 98.0 reading for the prior month. At 70.0 in November, confidence among Democrats was lower than their political counterparts, but has been trending upward since July’s reading of 56.1. Keep in mind too that both confidence numbers are still below their pre-pandemic readings in February, when GOP confidence was at 127.2 and Democratic confidence was at 79.8.

It doesn’t make sense for confidence to change virtually overnight like it did after elections, for reality is rarely as good as it feels when you are winning or as bad as it feels when you are losing. This political-based distortion could translate to investment distortions, with investors on either side of the spectrum following their emotions into buy or sell decisions. While investing based on emotion often leads to whipsaws, investing based on political emotion could be particularly damaging to portfolio returns.