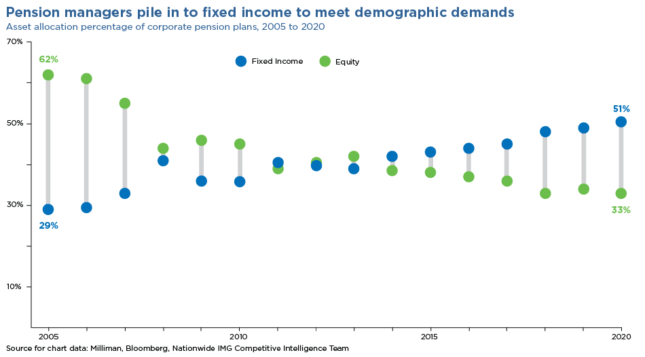 While pensions have largely given way to 401k programs in corporate America, there remains $1.8 trillion in assets in the largest 100 public companies’ pension plans, according to benefits consultant Milliman. Strong market returns have been a tailwind for pension plans, with the funded status of the programs at the best level (98.4%) since before the global financial crisis and up from 86.7% last March.

However, these programs face demographic challenges as the percentage of workers at or near retirement grows. These challenges contributed to a gradual adjustment in fixed income allocations in pension portfolios, from 29% in 2005 to 51% in 2020. This shift occurred despite the yield on the 10-year Treasury falling from 4.4% to 0.9% over the same period.

The change in pension allocation is emblematic of the challenges facing many investors groups, including individual investors. The demographic shift is forcing investors into fixed income despite the dramatic drop in yield, and thereby lowering overall return assumptions. Fixed-income mutual funds have attracted $1.9 trillion in new assets since the end of the financial crisis, while equity funds have lost $1.3 trillion. Given the current level of interest rates and credit spreads, this could impact return assumptions and the retirement outlook. Equity markets have seen a record surge in inflows over the last several months, but there is little indication of a shift in risk tolerance that could drive a structural shift in asset allocation.

Supply-side constraints are having an impact

More than meets the eye in rising inflation

The inflation spike comes from a narrow group of categories.