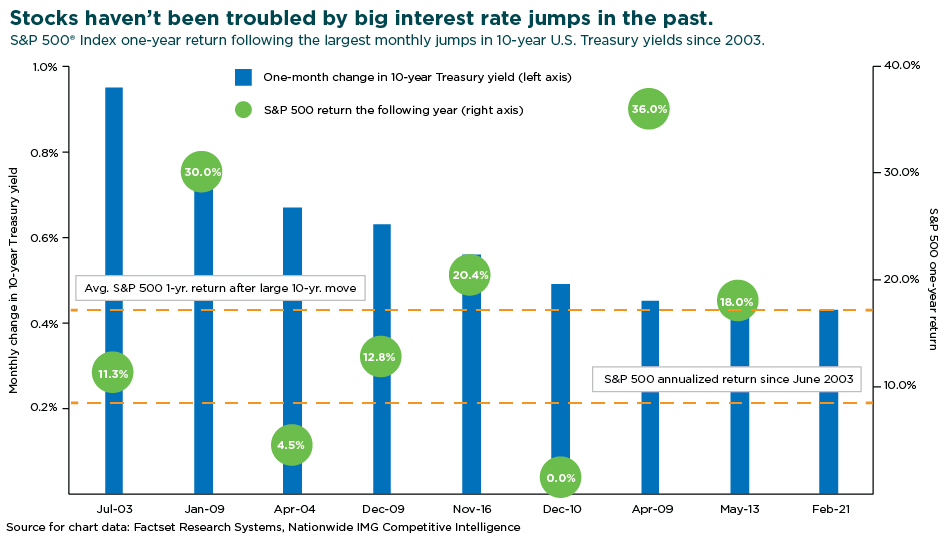 Back in Q1 of 2020, the 10-year Treasury yield dropped from a high of 1.92% to 0.68% in reaction to the COVID-19 outbreak and resulting fear of global deflation. The yield ultimately bottomed at 0.51% in early August, before steadily recovering through the rest of the year. But since the start of 2021, the rise has accelerated; the 10-year yield reached a high of 1.6% on February 25 thanks to rising inflation expectations, the prospect for continued heavy issuance and nervousness that the Fed will begin to trim asset purchases. In February, the 10-year yield increased more than 0.40%. Since 2003, there have only been eight months with larger spikes in the 10-year yield, the most recent occurring after the 2016 presidential election.

Rates remain remarkably low historically, but the trajectory creates several headwinds for markets and the economy. First, the Federal Reserve may find it difficult to justify its accommodative monetary policy, including near-zero rates, if long-term rates and inflation expectations continue to rise. Second, the aggressive fiscal policy of the Biden administration includes stimulus and infrastructure spending that, if passed, will increase the federal debt load. Third, steadily falling interest rates over the past decade have masked rising debt levels. If rates continue to move higher, it could crowd out the budget; every 1% move in interest rates would boost the deficit by over $300 billion, the equivalent of nearly 10% of total revenues.

Fourth, rising interest rates would impact individuals through higher borrowing costs for mortgages and capital losses in bond holdings. Finally, corporations would face rising interest expenses and potentially wider credit spreads as the corporate bond market faces disruption. Historically, a sharp move in interest rates has not led to prolonged equity weakness. In the eight times when rates moved higher than 0.4% in a month, the S&P 500® Index rose over the following 12 months, with an average gain of 17%.

Equity market momentum reflects the near-universal pessimism of investors, with the S&P 500® Index falling in five of the last six weeks

The core CPI jumped again in August as housing and service costs continue to build despite the Fed’s rate tightening.