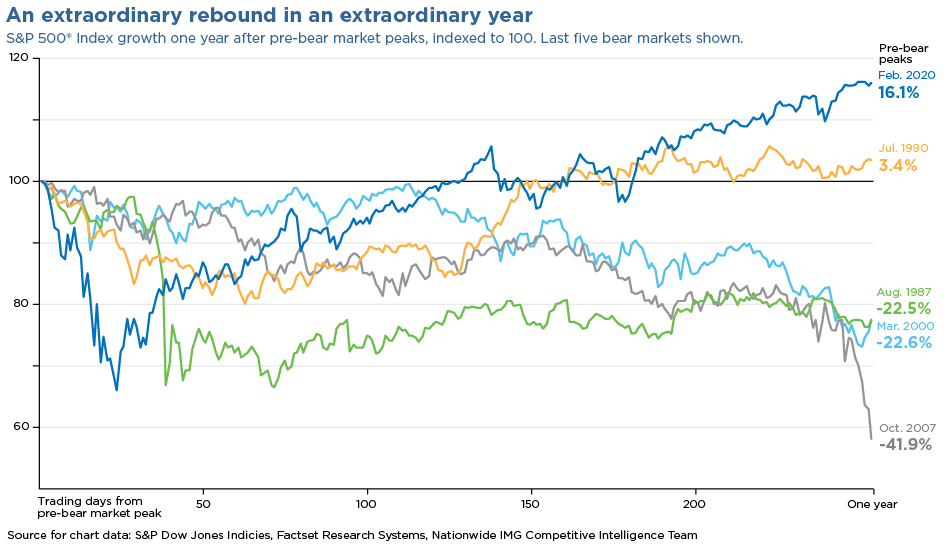 It was a little over one year ago (February 10, 2020, to be exact) when the S&P 500® Index reached its pre-pandemic peak, just as news about the coronavirus was growing worrisome. The 12 months following this peak have been unlike any previous period for stocks on record. As the gravity of the COVID-19 pandemic became clearer, investors dumped stocks to seek safety and liquidity in other asset classes, driving the S&P 500 lower by 34% in a mere 24 trading days, the fastest bear market descent in U.S. financial history.

The recovery from the bear market low was equally impressive; the S&P 500 touched a new high in less than 100 trading sessions from the low, due to aggressive fiscal stimulus and accommodative Fed policy. Since the bottom of the bear market in March 2020, the benchmark equity index has rallied 77%. Over the 12 months from the peak before the bear market, the S&P 500 was up 16%, only the second time stocks turned in a positive performance one year after the pre-bear market peak. (Stocks gained 3% in the year following the 1990-91 bear market.) Since 1960, the average one-year change after a pre-bear peak is -14%.

Congress and the Federal Reserve have become increasingly aggressive, creative and transparent in enacting economic stimulus measures, mostly from scar tissue developed following the 2007-09 financial crisis. During the current crisis, U.S. federal government debt jumped by $4.5 trillion and the Fed’s balance sheet increased by $3.3 trillion over the past year. Together, that’s more than one-third of U.S. GDP. These stimulus measures, along with the gradual reopening of the economy and optimism surrounding vaccines, have fueled an impressive economic rebound. It remains too early to declare victory, though signs suggest that the unprecedented actions to buoy the economy have contributed to the historic market recovery.