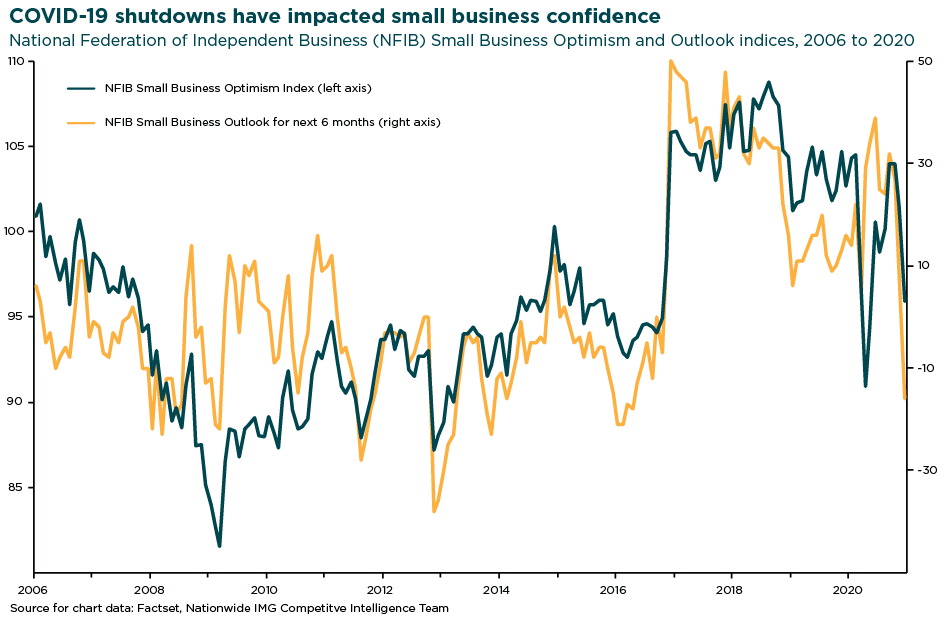 While few areas of the economy have been left untouched by COVID-19 lockdowns, small businesses have been particularly hard hit as they generally are in more service-oriented industries and have fewer options to access emergency capital. Through much of last year, the Small Business Optimism Index from the National Federation of Independent Business reflected improved sentiment as the economy emerged from lockdown. The renewed measures enacted by state and local governments in recent months have again hurt confidence. The overall index declined from 104 in October to 96 in December. The six-month outlook shows a more severe correction, from +32 in September to -16 in December, the lowest reading since 2016. The number of small businesses that expect the economy to improve fell a staggering 24% to -16%.

The deterioration in small business confidence has several ramifications for the broader economy. The Small Business Administration estimates 49% of private-sector jobs are at small businesses. The share of small businesses that plan to increase employment fell 4% to 17% in the past month. A study by Yelp showed that over 160,000 small businesses closed permanently between April and September of last year, with more than half of all businesses worried about needing to permanently close. While the Paycheck Protection Program helped during the initial phase of closures, there has been little government support since. The Biden proposal earmarks funds for impacted businesses, but there are fears that it may be too little and too late to have a material impact.

Equity markets were mixed in a volatile week