With inflation recently spiking to 40-year highs and economic activity slowing in the face of fading policy support and repeated supply shocks, many people are wondering if stagflation is coming to the U.S. economy. Stagflation can create an undesirable market environment for businesses and investors; rising costs and slowing consumer spending can make it harder for firms to maintain profit margins, putting price/earnings multiples under scrutiny. 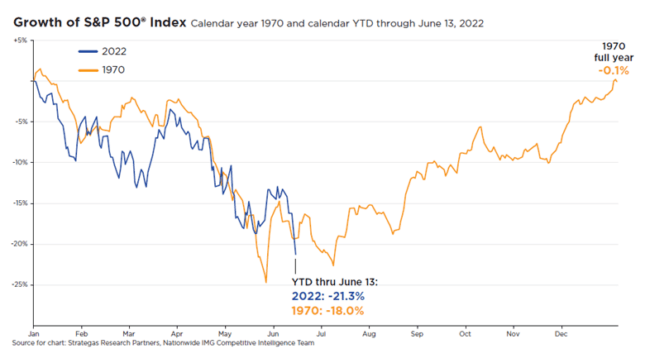 Stagflation, which is defined as a period of high inflation and slow economic growth, is most closely associated with the 1970s. Consumer inflation ran above 6.0% for much of the decade, jumping into double-digits twice. Real Gross Domestic Product (GDP), which is a measure of economic growth minus inflation, was negative for several years during the decade, culminating in the double-dip recessions of the early 1980s

Are we headed for stagflation?

That remains to be seen, but let’s examine the evidence. The inflation benchmark Consumer Price Index (CPI) was much hotter than expected in May, reaching 8.6%, its highest level since 1981. The current CPI report greatly diminishes the bullish narrative of “peak inflation” and further stokes inflationary fears of stagflation.

Compounding these inflationary headwinds is geopolitical uncertainty from Russia’s invasion of Ukraine. As a result, many market participants wonder if the U.S. economy will suffer the same fate as the stagflation scourge of the 1970s. This is a legitimate worry. After all, the market doesn’t tend to thrive during periods of stagflation. For example, when the economy faced stagflation during the 1970s, the S&P 500 fell approximately 17% in 1973 and 30% in 1974.

Will the stagflation of the 1970s return?

The current inflationary pressures present in the economy feel similar to the 1970s. For example, the 1973 oil crisis had a pervasive effect on the U.S. economy, imposing exorbitant fuel costs on consumers. Likewise, Russia’s invasion of Ukraine has exacerbated the rise in climbing energy prices, threatening to slow economic growth (the “stag” in stagflation) and further contributing to a decades-high inflationary environment. For context, at the beginning of the year, a barrel of crude oil was priced at approximately $76 per barrel. Now, the same barrel sells for around $121.

Higher oil prices mean less discretionary dollars for consumers and higher costs for companies, potentially challenging the margins of many retailers such as Walmart. Transportation companies are likely to feel the squeeze as well; as one example, railroader Union Pacific recently lowered financial expectations, noting the potential negative effects of “rising fuel prices and inflation” on its future results.

Why is stagflation difficult for policymakers to address?

Potential policy errors are another similarity to the 1970s, although still open for debate. Many market participants argue that the Federal Reserve’s characterization of inflation as “transitory” echoes the delayed start to combating inflation in the 1970s. Likewise, some policymakers believe it may be reasonable to increase taxes to reduce the deficit and slow consumption to fight inflation. This is also reminiscent of the 1970s, when then-President Nixon announced a freeze on prices and wages throughout the U.S. Lastly, globalization has transformed the macroeconomic environment, with many economists seeing resultant disinflationary benefits. The end of the Bretton Woods system in 1971, also known as the Nixon shock, and the current geopolitical tensions facing the U.S. economy from China and Russia’s invasion of Ukraine are also very similar. Each scenario has a very delicate relationship with globalization that can result in either deflationary or inflationary pressure.

Is stagflation different this time?

While there are some corollaries in the current environment to the 1970s, including repeated supply shocks and strong inflation, the Fed is expected to handle rapid price gains much differently this time. Real GDP growth is expected to slow to around 2.0% over the next year, with inflation projected to be elevated into 2023 – meeting the guidelines for stagflation. But these conditions are not likely to persist due to aggressive Fed tightening to pull back inflation. Either the Fed will be able to slow inflation without causing a recession (i.e., the “soft landing” scenario) or the economy will slip into a downturn over the next few years in response to much tighter monetary policy. In both scenarios, inflation should fall back to near the long-term 2.0% trend, resulting in only a short period of stagflation for the U.S. economy.