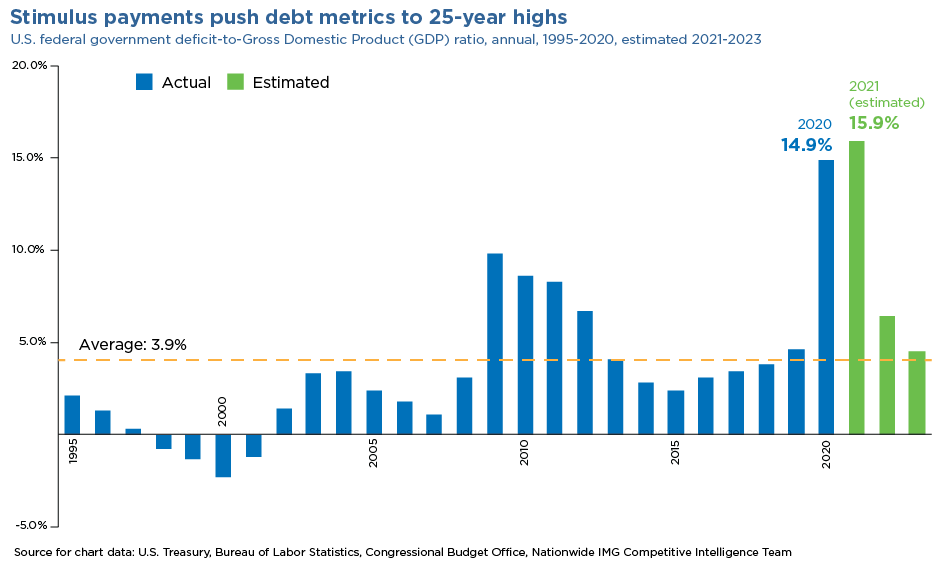 President Biden signed the latest round of Covid-19 relief into law on Thursday last week, adding $1.9 trillion in stimulus to the economy. Combined with $3.6 trillion from the five previous stimulus packages related to the coronavirus pandemic, the federal government has pumped roughly $4.5 trillion into the economy over the past 12 months. That’s equivalent to more than $35,000 per U.S. household.

Last year’s CARES Act and this year’s American Rescue Plan are the largest packages as a percentage of GDP in the past 50 years, with the money spent in 2021 expected to eclipse 2020. As a result, GDP growth for 2021 is expected to hit its highest rate since 1983.

A consequence of aggressive fiscal stimulus is a rising budget deficit. In 2020, the deficit-to-GDP ratio hit 14.9%, well above the 9.8% rate during the financial crisis in 2009. Only during World War II was the deficit-to-GDP ratio higher, with rates above 20% from 1943 through 1945. The ratio is now expected to jump to 15.9% in 2021 before fading to mid-single digits in 2022 and 2023. This excludes any incremental infrastructure spending currently being discussed.

Bond investors are beginning to react to the outlook for massive Treasury issuance, with the 10-year Treasury yield up nearly 70 basis points this year. With the federal debt currently topping $28 trillion and heading to $33 trillion over the next year, rising interest rates will increasingly “crowd out” other areas of the budget. The average interest rate paid by the Treasury during February was 2.28%, roughly half the rate from 2009. If rates were to return to the levels from a decade ago, the interest on the debt would be $1.7 trillion annually, equal to roughly half of the expected federal revenues for 2021.