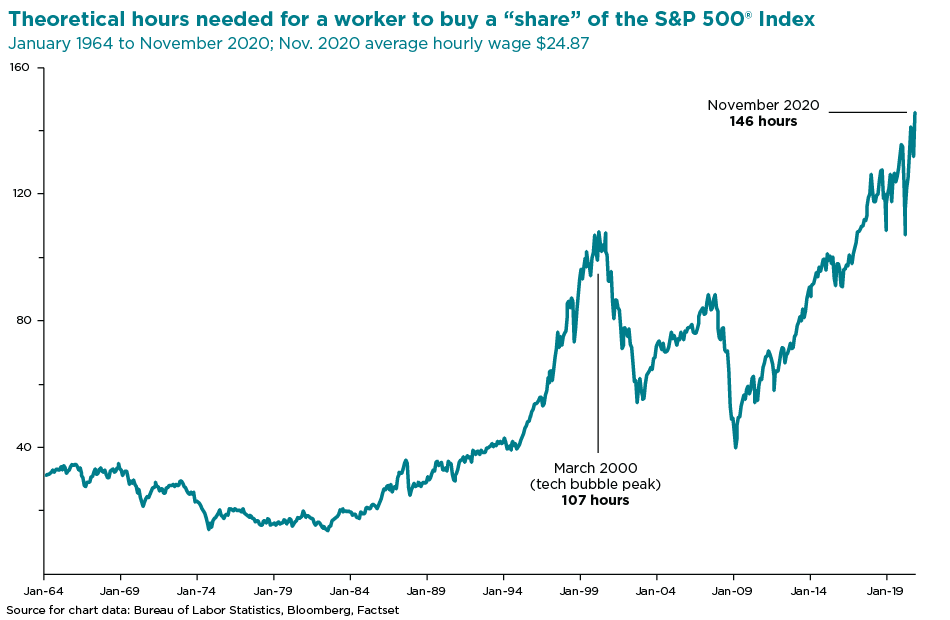 The equity market has been remarkably resilient since 2019 even with unprecedented disruption. The S&P 500® Index has returned more than 50% since January of last year despite the expectation for no earnings growth between 2019 and 2021. As a result, the price-to-earnings ratio for the S&P 500® based on earnings over the next twelve months is currently at 22. That’s nearly 40% higher than the average forward P/E of 16 over the past 25 years and near the peak of 24 seen during the late 90s technology bubble.

The chart above frames the stock valuation argument differently. It compares the index value of the S&P 500® to the average hourly earnings for individuals. At the end of November, it would take 146 hours for the average person to make enough to buy a “share” of the S&P 500®. This ratio is double the level seen in 2012 and more than seven times the level of the 1980s, showing the degree to which equity returns have outpaced wage growth.

A tremendous amount of liquidity in the financial system has driven stock valuations, driven by accommodative monetary policies from Federal Reserve along with aggressive fiscal stimulus from the federal government. A climate of incredibly low interest rates will support higher stock valuations, as discount rates are lower and equity values increasingly more attractive than bonds. Historically, there is little correlation between near-term market performance and valuations, though the correlations rise when you look at longer return horizons. High valuations could result in lower market returns over the intermediate-term, as the S&P 500® “grows” into its valuation. For instance, between 2000 and 2007, there was a cumulative return of just 10% for the S&P 500®, while earnings for S&P 500® firms grew by 73% over that period.