Stocks go their own way in a turbulent economy 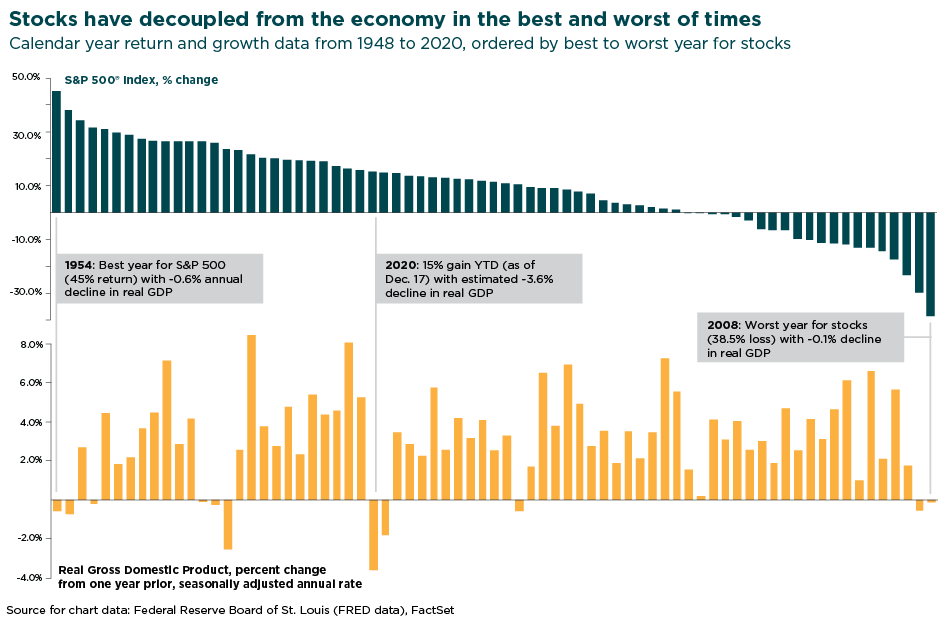 The resilience of the equity market in 2020 has amazed analysts, given the unprecedented challenges that COVID-19 brought to the economy. In March, stocks experienced their quickest bear market on record, but rapidly recovered and steadily hit fresh record highs since August.

Through December 17, the S&P 500® Index has gained 15% for the year, which would be the 27th best year since 1947, nearly cracking the top third of all years. This strong performance occurred despite an estimated 4% decline in GDP growth, the weakest year for economic growth since 1933.

The decoupling of economic and market performance is not unusual in a calendar year, as the chart above shows. What is unusual, however, is that the year leading into the recession was strong; 2019’s growth of 29% was the seventh-best year for the market over the period. This year most closely mirrors 1982, when the market gained 15% despite a decline in GDP of 2%. In 1981, however, the market lost 10%, as the equity market is generally a forward-looking machine. Similarly, in 2009, the market rallied 25% on a 3% decline in GDP, though 2008 was the weakest year for stocks since 1937 at -39%.

This anomaly reflects the speed of the economic and market decline and recovery, in that they both happened in one calendar year, but also the unprecedented nature of conditions in 2020.