The Fed loosens the reins on inflation 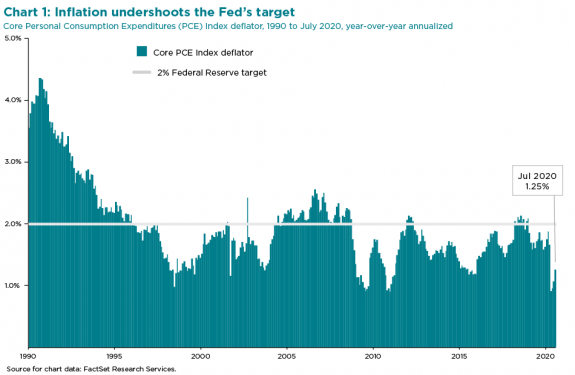 In a speech last week during the Federal Reserve’s virtual Jackson Hole Conference, Fed chair Jerome Powell confirmed a shift in the central bank’s long-term goals: to aim for an average inflation rate near the Fed’s stated 2% target, allowing price increases to overshoot after a long spell of persistent weakness; and to take a more one-sided approach to the labor market, letting unemployment trend lower than the Fed’s typical comfort level.

This change represents the most dramatic shift in the Fed’s framework since they first adopted the 2% target (as measured by core PCE deflator) in 2012. It also has major implications for the economy and the financial markets in the years ahead.

For investors, this shift signals the Fed is intent on keeping interest rates near zero for an extended period, creating conditions for the U.S. economy to run “hot”. It also indicates that the Fed believes persistent below-trend deflation is as big of a concern as elevated inflation. It’s important to note that the core PCE index has averaged just 1.4% since 2012 and crossed into the 2% target range 12 times in those 103 months. (See Chart 1.)

While the current level of inflation remains low, expectations for future inflation are on the rise. Basic economic principles suggest that money creation through expansionary monetary policy can lead to faster inflation. The monetary base, which is total amount of currency either in general public circulation or in commercial bank deposits held at the Federal Reserve, has exploded by 44% over the past year. During the pandemic and ensuing economic shutdowns, the Fed provided necessary liquidity to the financial markets by aggressively expanding its balance sheet, growing 86% on an annualized basis. As a result, we’ve seen the sharpest adjustment on record to the 10-year breakeven inflation rate (the difference between the 10-year Treasury and TIPS yields), up from 0.5% in March to 1.7% currently. (See Chart 2.) 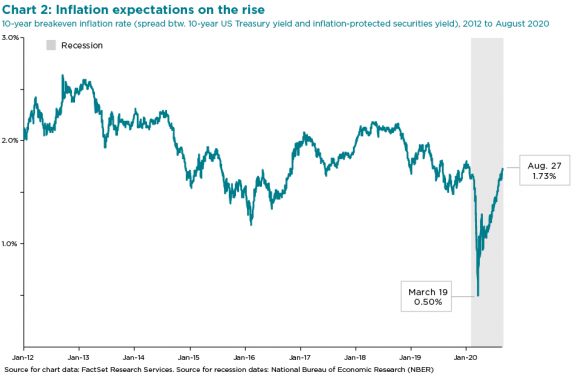 While long-term inflation risks have risen, so have the intermediate-term risks to equities. Investors should expect the road ahead to be bumpier than the last five months; recall there were three corrections in the S&P 500® Index prior to the first Fed tightening in the last cycle. But the potential is there for a generally robust upswing for stocks in the years ahead, given clear monetary support from the Fed and growing participation from retail investors. This process is not likely to end well—the eventual rise in inflation and interest rates will be a challenge for policymakers and may come at a time when markets will have likely reached very aggressive valuations—but it also isn’t likely to end quickly either.

Are markets setting up for year-end rally?

Equity markets were mixed last week, with strength in a handful of technology names allowing a modest gain for the S&P 500® Index

After a strong first half of the year, economic winds began to shift in Q3.