The presidential election brings the noise 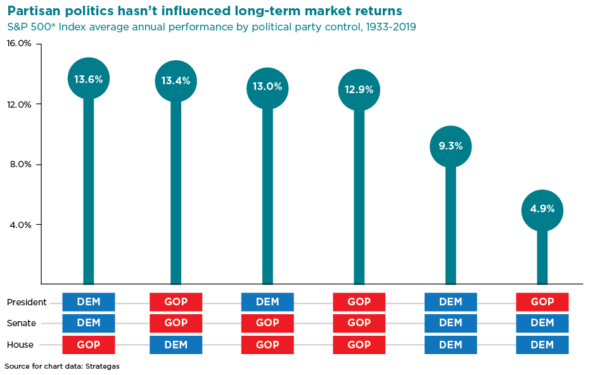 Election season is getting raucous with both presidential candidates actively on tour through the swing states. With the death of Justice Ruth Bader Ginsberg and subsequent political jockeying to fill her Supreme Court seat, the campaign volume is amping up.

Investors are watching the polls closely now, trying to gauge potential market winners or losers depending on all possible outcomes. Historically, there has been little discernable difference in market performance no matter which party controls the White House or Congress. Over the previous nine decades, most configurations of party control have resulted in similar returns for the S&P 500, with outliers due to issues unrelated to politics.(See chart above.)

Despite data showing party control doesn’t drive market performance, rising partisanship could cause investors to act emotionally. For example, consumer confidence was dramatically stronger among Democrats when Obama was in power. Trump’s victory in 2016 saw a sharp reversal, with Republicans suddenly more confident and Democrats despondent.

Moreover, a Pew Research study found the share of partisan voters who hold “very unfavorable” views of the opposite political party—both Republicans of Democrats and Democrats of Republicans—has roughly tripled over the past 25 years. As this year’s volatility has demonstrated, investing on market emotion is ill-advised. This is also true of investing on political emotion.