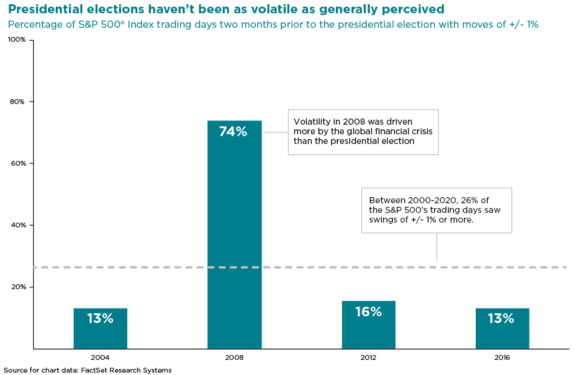 There was plenty of disruption potential in last week’s headlines: the contentious presidential debate; the looming Supreme Court confirmation battle; continued wrangling over the next round of fiscal stimulus; and President Trump’s positive coronavirus test. Despite the turbulent news cycle, the equity market was remarkably calm, even breaking its four-week losing streak.

Through much of the past four years, stock markets have been in a reactive mode to political news and uncertainty. The relative calm in the current environment could either indicate investors are exhausted by the onslaught of headlines in 2020 or they’re beginning to put political news in proper context. For perspective, on March 11, the day when the NBA suspended its season, the S&P 500® Index was down 5% and fell another 10% the next day. The day following President Trump’s positive coronavirus test, the S&P 500® declined just 1%.

Current conventional wisdom says equity markets will remain volatile and reactive between now and the end of the year. We expect that to be true, given the uncertainty around coronavirus and the trajectory of economic reopening. But a presidential election is not necessarily a catalyst for volatility. Over the past four presidential election cycles, the two months preceding the election have seen relative calm, with directional moves of 1% for the S&P 500® in just 15% of trading days. For comparison, over the past 20 years, 26% of trading days have seen up or down moves of more than 1%. The only exception was 2008, and that was driven by the financial crisis rather than the election. This year could be another exception, but likely due to macroeconomic factors more so than the election.