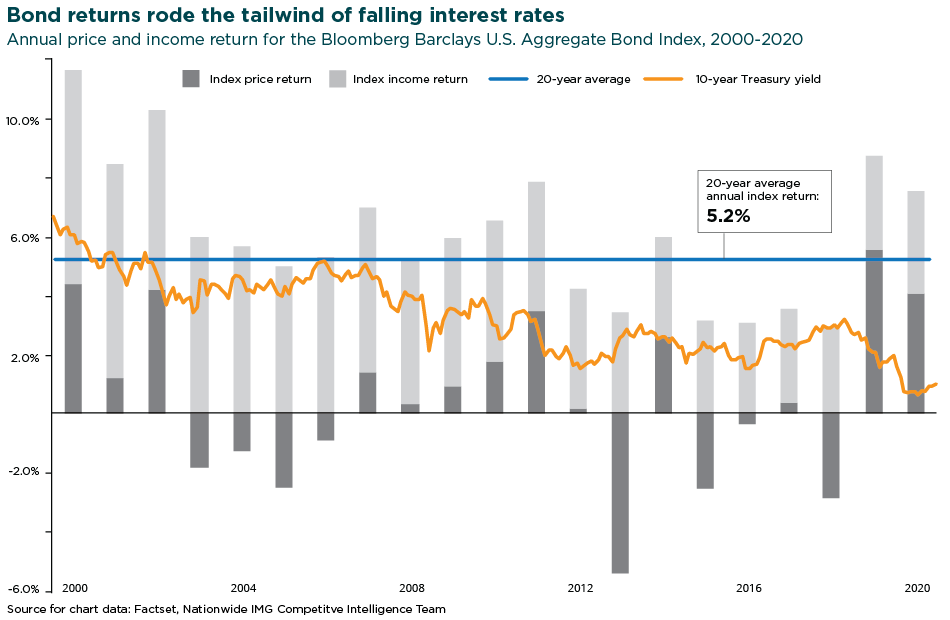 Interest rates were on the rise last week with the 10-year Treasury yield topping 1.0% for the first time since last March, closing at 1.13% on Friday, January 8. One week into 2021, the benchmark bond yield is up 0.21% since the start of the year. This jump poses a frustrating challenge to an already difficult environment to generate yield, as investors struggle with allocation decisions.

Over much of the past 40 years, interest rates have been in secular decline, with the 10-year yield falling from a high of 15.8% in September 1981 to a low of 0.5% last March. As a result, bond funds have seen a continual tailwind of price appreciation to boost returns well above the return from interest payments. This has been particularly true over the past two years, where price return contributed 4.0% and 5.5%, respectively, to the total annual return of the Bloomberg Barclays U.S. Aggregate Bond Index.

Rising interest rates would act as an impediment for future bond returns. As we saw in 2018, the 2.9% generated from income that year was offset by a 2.9% decline in the price of the Index. That resulted in a flat return in a year that saw the 10-year Treasury yield rise from 2.43% to 2.68%, after touching 3.2% in November. With a duration of 6.2 years for the Bloomberg Barclays U.S. Aggregate Bond Index, a 1% rise in the level of interest rates across the curve would result in a 6% decline in portfolio value. With a current yield of just 1.2%, there is little income buffer to protect against rising rates. Given the influx of flows into bond funds in recent years, investors may not be prepared for potential capital losses in their bond holdings.