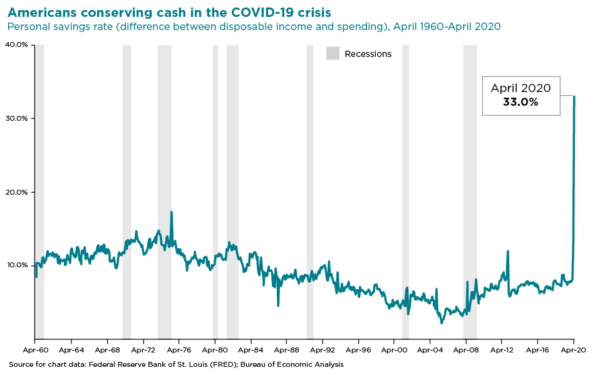 The U.S. savings rate spiked to a record 33% in April as Americans stockpiled cash in reaction to the unprecedented shutdown of the economy and skittishness around consumer spending. Given that consumers account for roughly two-thirds of the economy, the 14% decline in spending in April was devastating. The savings rate (the difference between income and spending) of 33% is nearly double the previous record dating back to the 1960s and up from 13% in March.

The spike in savings has not correlated to greater investment, as retail fund flows have been negative for both equities and fixed income and retirement savings has been curtailed. Consumers are simply sitting on a stockpile of cash, awaiting further clarity on the economy and the market. Bank of America, whose services reach half of all American households, said checking accounts have 30% to 40% more money in them than they did before the coronavirus pandemic.

As the chart above shows, consumers have curtailed spending during past recessions. There were meaningful increases in saving rates in six of the past eight recessions, though those jumps pale in comparison to the current spike. This is potentially good news for the recovery, as consumers have a significant amount of “cash reserves” at hand to spend once the economy reopens.