Current yield curve is a good sign for economic growth 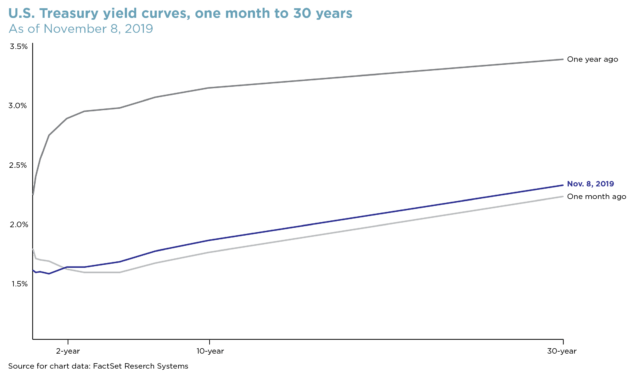 Long-term interest rates have spiked in recent weeks as investors adopted a “risk-on” approach and equity markets rallied. Ten-year Treasuries reached their highest yields since July, rising above 1.9% in early November. As recently as early October, 10-year yields were as low as 1.5%.

Also, it wasn’t too long ago (late August, to be exact) that investors were hyper-focused on the inversion of the yield curve. The spread between 10-year and 2-year yields turned negative for four days in August, sounding the historically indicative recession signal. Just one month ago, the yield curve was still inverted from the shortest-term yields all the way to 5-year Treasuries. But on Friday, November 8, the gap between 10-year and 2-year yields reached its widest level since July. Currently, the curve is positively sloped at each point from 3-months to 30-years, signaling a more optimistic view of the economy.

In the current environment, massive global central bank stimulus through bond-buying programs have driven rates negative. Of the $12 trillion in negative-yielding global debt, 80% is held by central banks, indicating the Bank of Japan and European Central Bank (not institutional and retail investors) are buying negative-yielding debt. Normalization of the domestic yield curve is a good optical sign for economic growth, though the rise of domestic rates will likely be limited until global central banks slow buying and rates turn higher.

Retail sales grew by a modest 0.25 percent for October, by far the slowest pace since the reopening of economies in May.