The large declines in retail sales in December and November signals that consumer spending lost a lot of steam despite some cooling in inflation as we ended 2022. We see further downside in 2023 as we expect the labor market will start to weaken significantly, which will depress personal income growth. On the housing front, existing home sales fell for an eleventh straight month as prospective homebuyers continue to contend with low inventory and high mortgage rates.

Retail sales fell by at least one percent for a second straight month in December.

Existing home sales fell for an eleventh straight month in December to the slowest pace since 2010.

The U.S. economy should expand 3.2 percent (annualized) in Q4, following the same growth rate in Q3. An expected 3.0 percent (annualized) increase in real consumer spending should be the main driver of real GDP, contributing about 2.1 points to total growth. However, as the recent retail sales data confirm, the strength in consumer spending was confined to October and spending momentum as we exited 2022 cooled sharply. The sector providing the next largest boost to GDP is likely inventories, which does not represent a healthy mix since the rise in inventories is unwanted. As companies across the retail and wholesale sectors attempt to work down their inventories, it will weigh on new orders and production in early 2023. The main drag on activity in Q4 should be from residential investment as it contracts for the seventh straight quarter due to high mortgage rates and still elevated prices.

Durable goods likely rebounded 1.5 percent in December following a 2.1 percent decline in November. A recovery in aircraft orders should lead the way following a 30 percent plunge in November. The core readings for orders and shipments—nondefense capital goods excluding aircraft—likely declined modestly, indicating that businesses pulled back on their investment reins at the end of last year due to concerns about weakening aggregate demand and a looming recession.

Consumer spending in nominal and real terms should each contract 0.2 percent in December as consumers’ wallets are pinched by still high inflation, elevated borrowing rates, and the drawdown in pandemic-related savings. The weak December retail sales indicate that goods consumption continues to decline, leaving the services sector as the main engine of strength. The December employment data point to a modest 0.2 percent increase in private wages and salaries and overall personal income as average hourly earnings posted just a 0.3 percent rise and the average workweek declined. The saving rate should rise modestly from the very low 2.3 percent rate posted in November. The PCE price index likely was unchanged on the month, allowing the year-on-year rate to decelerate to 5.0 percent from 5.5 percent in November. The core PCE price index should rise 0.3 percent, slowing the year-on-year pace to 4.4 percent from 4.7 percent in November. 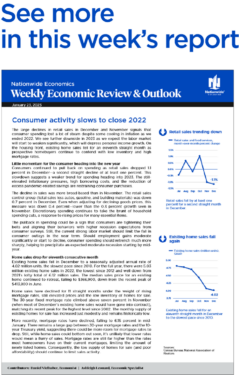