Encouragingly consumer price inflation continued to cool in December. The easing of inflation should provide reason and room for the Fed to slow the size of the policy rate hikes to 25 basis points starting at the next FOMC policy meeting on January 31 – February 1. In other economic news, the NFIB small business survey showed decreasing optimism among small business owners, many of whom have a negative outlook on the economy and expected sales for 2023.

The 12-month change in the CPI fell for a sixth straight month and is now at its lowest level since October 2021.

Small business optimism fell in December as firms reported lower earnings and reduced expectations for economic growth in the first half of 2023.

Overall retail sales are expected to decline moderately in December, down one percent on the month, weighed down by autos. Auto unit sales fell by 5.6 percent in December, following a 6.1 percent decline in November. The pullback in auto sales should suppress headline retail sales as autos historically are a primary contributor to retail sales — accounting for over 18 percent of the total in November. The decline in retail sales, even when adjusted for lower inflation, indicates that consumer spending was cooling as we exited 2022, likely due to inflationary pressures, rising interest rates and the drawdown of excess pandemic-related savings.

The unexpected deterioration of ISM measurements in November and December is likely a sign that the Fed’s interest rate hikes are beginning to set in. Manufacturing production should fall 0.3 percent as businesses prepare for the anticipated recession. New orders have been declining and firms have tried to keep activity steady, fearing the loss of hard-to-find workers. However, the fight is being lost with orders persistently weak. A retreat in mining activity should add to the weakness as raw material stockpiles have been refilled.

Housing starts in November were down over 19 percent from the beginning of 2022, with notable weakness in single-family starts. Interest in new construction plummeted as mortgage applications declined 10.3 percent at the end of 2022, the largest decline in three months. We expect a further 5.0 percent decline in starts for December as activity waned towards year end. However, over the first week of January the volume of applications climbed after the average 30-year fixed mortgage rate dropped to 6.42 percent from 6.58, encouraging some buyers to take advantage of lower rates while they last. 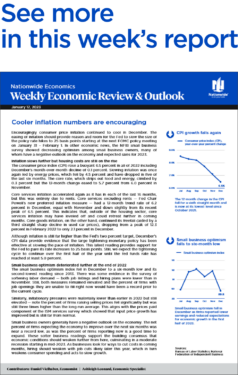