The holiday season typically brings a quiet close to the year in the financial markets. However, the chaotic abandonment of the zero-Covid policy by China has sparked concerns that recent cooling in inflation could reverse as China revives its enormous demand for commodities. At the same time, there are rising worries that the dramatic spike in Covid cases will curtail Chinese factory production, which would add further upward pressure on prices. These inflation concerns fueled an upward reversal in Treasury yields and dampened equity market sentiment, albeit these market moves were likely exacerbated by thin seasonal trading volumes. The yield on the benchmark 10-year note climbed back to 3.88 percent, the highest since November 9th, and the yield on the 2-year note rose to 4.43 percent, reversing the decline in yields posted in December.

The ISM manufacturing index is likely to fall further below the 50 boom-bust mark to a reading of 48.5 in December, down from 49 in November. Manufacturing activity is contracting as new orders demand wanes. The new orders index has been below the 50-mark in five of the past six months. A silver lining is that supplier deliveries times have quickened due to the drop in orders demand and this has allowed the prices index to retreat sharply – falling to 43 in November, well off the cycle high reading of 92.1 recorded in June 2021. In contrast, the ISM non-manufacturing index likely remains well in expansion territory as we expect it to only slip to 55.3 from 56.5. The shift of consumer preferences toward service consumption from goods consumption buffers the services side of the economy. The prices index remains high – coming in at 70 in November.

The number of job openings should continue to trend gradually lower. In October, job openings totaled 10.334 million; extending the decline from the all-time high of 11.855 million in March. The highly monitored ratio of the number of openings relative to unemployed workers also fell to 1.7 in October from a record high of 2 in March. However, Chairman Powell has indicated that the 1.7 ratio remains too high since it represents a labor market that is unhealthily too tight. The quits ratio is another key metric because as the share of workers that quit their jobs fluctuates, so does the rate of wage gains workers are able to garner. As more workers have quit their jobs searching for better opportunities, wage growth has increased.

January 6: Employment to slow, but the unemployment rate remains low

We look for the monthly advance in non-farm payrolls to shrink from 263k in November to 185k in December. The slowing in job creation should be broad-based across the services and goods sectors. However, the unemployment rate is likely to remain low at 3.7 percent. Most importantly, average hourly earnings should rise 0.3 percent, significantly more moderate than the 0.6 percent jump in November. This would allow the year-on-year gain for hourly earnings to ease, but only to an elevated 4.9 percent rate from a 5.1 percent pace in November. Pre-pandemic the annual pace of average hourly earnings was running around 3 percent. 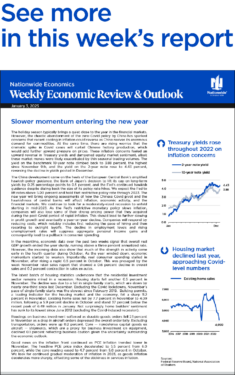