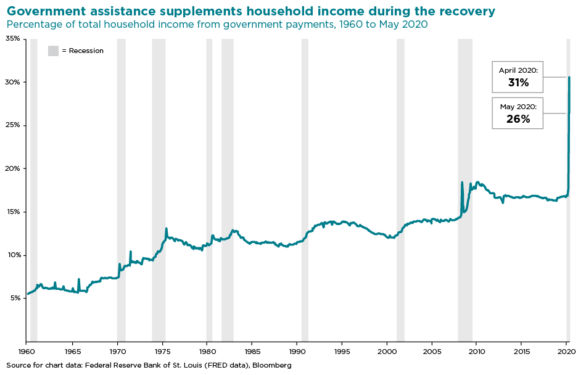 Recent economic data, including rising retail sales and household spending, show a strong recovery in consumer activity. Increases in some non-economic indicators, such as hotel bookings, restaurant reservations and requests for directions on mobile phones, confirm a favorable shift in consumer behavior, although it has stalled in certain areas of the country where coronavirus cases are increasing.

Robust consumer spending, which accounts for around 70% of economic activity, is critical for healing the economy. Consumers need confidence that the rebound in cases is manageable, but more and more it also depends on continued financial support from the federal government.

Over the past three months, IRS stimulus checks and enhanced unemployment benefits increased the percentage of total household income derived from government transfer payments. Reliance on government financial support has risen steadily over the last five decades, from 6% in 1960 to 17% earlier this year, due to rising Social Security payments and social spending programs. The fiscal stimulus payments in response to the pandemic shutdown pushed this percentage to 31% in April, before falling back a little to 26% in May.

The increased reliance on government financial support puts the economic recovery on fragile ground. Currently, the White House and Congress are working on additional federal stimulus measures that could include direct payments to individuals, but this round of legislative negotiations is marred by more partisan disagreement than the previous rounds.

Equity markets have staged another impressive recovery, with the S&P 500® Index breaking out to a fresh record high