Investors on edge as the bear market rushes in 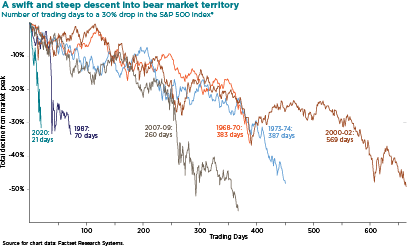 Stock markets remain deep in the “fog of war” as investors continue to sell equity holdings and reduce their risk exposure. Through last Thursday (March 19), the S&P 500® had experienced nine straight days of intraday volatility where the benchmark index swung up or down by at least 4%. 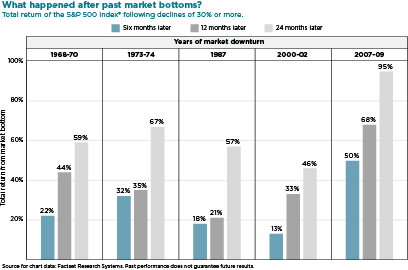 From the February market peak to last Wednesday (March 18), the S&P 500 has lost a staggering 32% and crossed into bear-market territory in record time. Over the last 70 years, there have been five previous occasions when the S&P 500 fell by at least 30%. On average, these market drops lasted 297 trading days, or roughly a year and 2 months. The drop in 1987 took 70 days, which was the fastest descent until now. (See chart above.)

It’s notoriously difficult to call a market bottom with any confidence, especially in the current climate of extreme uncertainty. Bottoms generally occur when the pain of market losses is at its most intense. Sorting through the damage at the bottom can be a messy process. Investors tend to be frozen by fear after steep market drops, and intense rallies can begin often before they realize it.

Investor emotions are likely to remain feverish as the world continues to deal with the COVID-19 pandemic in the near term. It’s good to remember to keep your emotions in check at this time and stay true to your investment goals over the long term.

Nonfarm business productivity was stronger than expected in the first quarter.

Bank lending standards eased on balance for the first time in nearly two years over the last three months.

A shift to fixed income could impact total return assumptions.