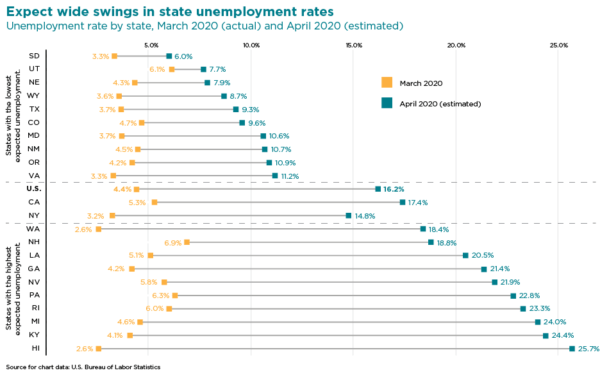 Weekly unemployment claims continue to defy historical precedent, with 4.4 million new filers in the most recent week. The weekly average over the past five weeks has been 5.3 million, more than seven times the previous record from 1982.

The shutdown of the economy has impacted all industries, although personal care, leisure and entertainment, food and drink and charities have been particularly hard hit. Hours worked in these sectors are down more than 60% since January.

Prior to the COVID-19 outbreak, the U.S. unemployment rate sat at its lowest level since the 1950s. Now, the April rate is expected to jump to the highest level since the Great Depression. There’s a wide variance in expected unemployment by state, given the overexposure to certain industries in specific regions. Notably,  Hawaii’s reliance on tourism is expected to drive the unemployment rate from 2.6% in March to more than 25% in April. South Dakota, by comparison, is only expected to jump from 3.3% to 6.0%, due to the primarily agricultural and health-related job base.

While the gradual reopening of the economy will bring some people back to work, the continued social distancing measures and consumer unease will likely remain a headwind for many industries for some time to come.