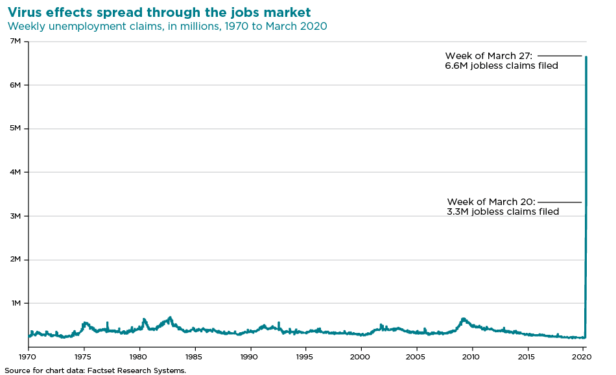 Many U.S. companies have taken the difficult but necessary step to lay off significant numbers of their workforces as a result of the COVID-19 pandemic and quarantine. As an early result of these actions, the unemployment rate in March jumped to 4.4%, the highest jobless rate since August 2017. However, it’s likely the March report severely understates the extent of job losses; the data was collected in mid-month and doesn’t reflect the widespread layoffs that occurred during the last two weeks of March.

In the March jobs report, the number of unemployed Americans increased by 1.4 million to 7.1 million, while the number of employed declined by 3.0 million to 155.8 million. If the nearly 10 million jobless claims filed in the last two weeks of March were included in the monthly non-farm payrolls report, the unemployment rate would’ve doubled and then some. Goldman Sachs estimates the unemployment rate will reach 15% in the coming months, a rate not seen in this country since the 25% experienced in the Great Depression.

Many measures in the federal government’s $2.2 trillion stimulus plan are directed toward keeping people working, including the Paycheck Protection Program, launched just last Friday (April 3). The program offers $350 billion in federally-backed loans to small businesses to help them retain their employees. Small businesses are particularly vulnerable to a sustained downturn; a recent survey showed 55% of small business would shutter if revenues dried up for 1-3 months. A wave of small business closures would devastate the U.S. economy, as nearly half of jobs and growth in Gross Domestic Product come from small businesses.