The yield curve can be a useful recession signal, but right now there’s more than meets the eye. 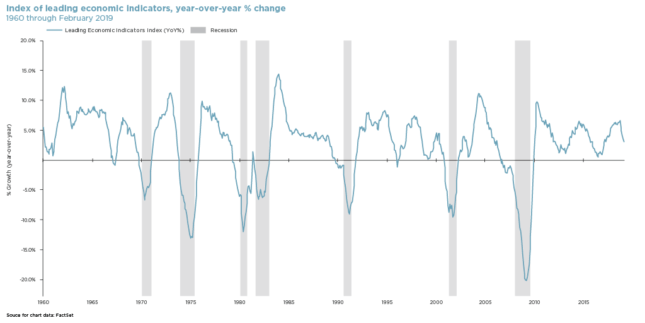 Since the end of last month, investors have fixated on the inverted yield curve, which has a nearly flawless record of signaling recessions over the last 50 years. At this stage of past business cycles, yields on shorter-term Treasuries typically rise at twice the pace of longer-term yields, as the Fed tightens rates to hold off inflation. But that’s not happening in the current cycle.

It’s rarely advisable to say “it’s different this time,” but there are unique circumstances affecting interest rates at present. Inflation is practically non-existent, allowing long-term rates to remain low. Plus, an insatiable appetite for income-producing assets and super-accommodative monetary policies around the world have acted as an anchor for rates across the board.

Another effective (though not as popular) recession gauge is the index of leading economic indicators. This index represents 10 data points, not just one, so it presents a broader picture of the economy than the yield curve. Since 1970, the index has turned negative in advance of all U.S. recessions with one exception. At present, the index is at +3%, above its average since the last recession.

Except where otherwise indicated, the views and opinions expressed are those of Nationwide as of the date noted, are subject to change at any time and may not come to pass. Nationwide Funds are distributed by Nationwide Fund Distributors LLC (NFD), member FINRA, Columbus, Ohio.

Nationwide, the Nationwide N and Eagle and Nationwide is on your side are service marks of Nationwide Mutual Insurance Company. ©2019 Nationwide