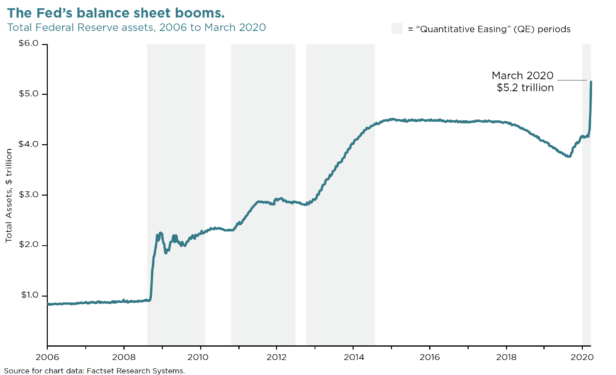 Back in February (seems so long ago right now), the stock market was soaring to record highs, but the bond market was signalling stress; the yield curve flattened as the Federal Reserve cut interest rates and fears of a pending recession grew.

Bond investors are not epidemiologists and could not forecast the current global pandemic. But the bond market has a better track record than the stock market of identifying signs of stress. Over the last several weeks, the COVID-19 crisis has taxed the bond market’s “plumbing”–the financial channels that conduct the flow of cash and credit throughout the economy–but did not break it. Current credit market conditions point to a growing likelihood of a recession, but are not indicating an economic collapse. 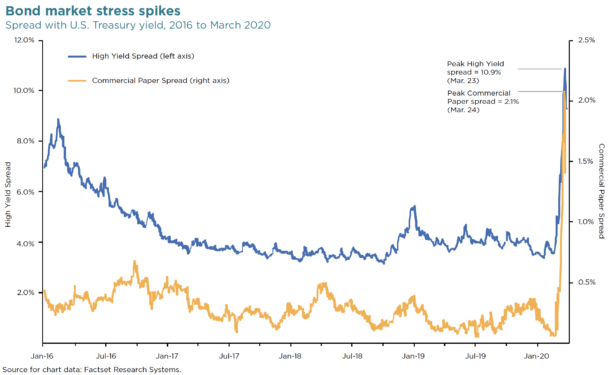 The Fed’s March 23rd announcement to expand purchases U.S. Treasuries and other fixed income securities shows there’s no limit to the measures the Fed is willing to take to support the financial markets and the U.S. economy. The Fed’s latest round of “quantitative easing” now covers corporate bonds and bond ETFs, municipal bonds, commercial mortage-backed and asset-backed securities, in additional to Treasuries and mortgage-backed bonds.

Other financial-crisis era programs, including the Money Market Mutual Fund Liquidity Facility (MMLF) and Commercial Paper Funding Facility (CPFF), have been revivied and appear to be settling nerves. But as a result of these efforts, the Fed’s balance sheet swelled to $5 trillion for the first time. (See the chart above.)

Investors can check the temperature of current bond market conditions by looking at the spreads or differences in yield between different bond types and U.S. Treasury rates. For instance, spreads for high-yield bonds (representing debt of riskier companies) touched 10.9% on Monday, March 23, but settled to 9.3% by last Friday. Spread for commerical paper (short-term corporate debt) widened to 2.1% on Tuesday, March 24, before dropping to 1.4%. (See chart above.)

It’s too early to sound an “all clear” signal, but the current bout of bond market stress looks more similar to the shocks in 2011 and 2016, rather than the pain from 2008.