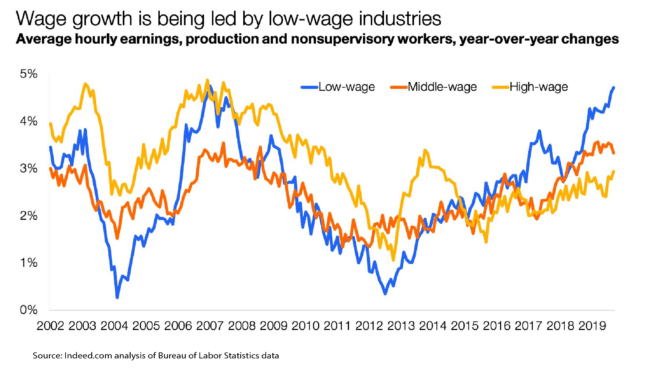 Why wages are rising

October’s employment report (released on November 1 showed the U.S. economy added 128,000 jobs during the month, easily beating expectations and marking a record 109 consecutive months of job market expansion. Growth in the labor market came despite the drag of 42,000 job losses in the auto sector related to the now-settled General Motors strike.

In more good employment news, the job growth numbers from August and September were revised substantially higher, resulting in a three-month average of 176,000 new jobs created per month, roughly in line with the past decade. The labor force participation rate, which reflects the percentage of adults actively in the workforce (either employed or looking for work) rose to 63.3%, the highest level since 2013. The unemployment rate climbed slightly higher to 3.6%, but remains near a 50-year low.

These favorable employment market trends have been going for some time now, but wages have lagged, at least until recently. Over the past 12 months, wage growth has ticked slightly higher to 3.0%, which is well above current annual inflation levels.

Which workers are benefiting

The chart above illustrates where wage growth has had the biggest impact on low wage workers. The latest reading shows wage gains for the lowest segment of workers is approaching 5% on a year-over-year basis. That’s the best pace of wage growth since before the financial crisis. The strongest wage gains were seen in the restaurant sector. This bodes well for consumer spending as the U.S. economy enters the always-important holiday shopping season.