Volatility reveals the best and worst of times 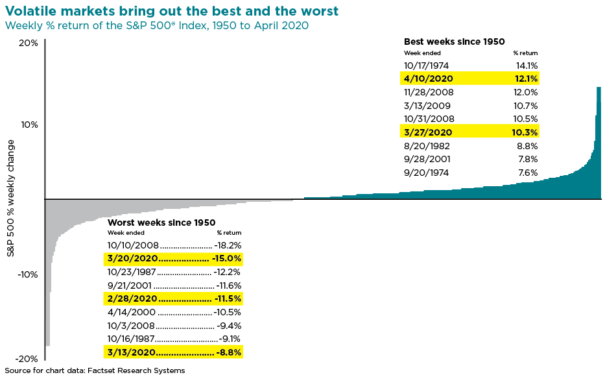 We continue to see unprecedented volatility in the financial markets as investors trade largely on emotion in the vacuum of certainty around the COVID-19 pandemic. During the week of April 6-10, the S&P 500 gained 12%—the large-cap benchmark’s best weekly performance since 1974—on rising optimism about a possible re-opening of the U.S. economy in May and further evidence that Federal Reserve is willing to be the “buyer of last resort” in the bond markets.

Two of the top six “best weeks” for the S&P 500 over the last 70 years have occurred this year, since the February market peak. On the other hand, three of the top nine “worst weeks” since 1950 have also occurred during this period of extreme volatility.

After the staggering and demorializing decline in the stock market, the recent bounce is encouraging. However, the continued volatility reflects pervasive unease among investors. In a vacuum of certainty, the natural instinct is to “do something,” when often the wisest path is to remain vigilant and informed. It’s important not to be reactionary, as emotion is likely driving the violent swings in the market.

Calming those swings in the stock market will likely be necessary to return to a sense of normalcy. That may require greater clarity on the timing of the end of quarantine and a better understanding of the lasting impact of the pandemic and shutdown on the economy.