Will the Fed go back to balance sheet expansion? 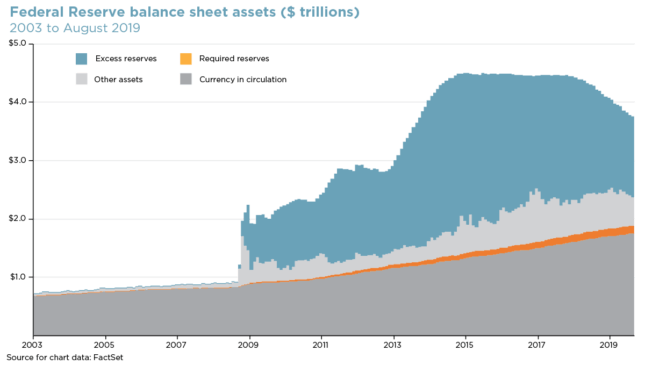 While the recent Federal Reserve rate cut dominated the news cycle last week, another development in the fixed income market induced flashbacks to the financial crisis of 2008. More than $1 trillion moves through the repo market (overnight repurchase agreements) every day, providing crucial “plumbing” to the broader financial market. The repo market usually doesn’t draw much attention… until it does, often signalling potential trouble such as liquidity issues and market stress. Previous bouts of instability in the repo market hit just before the last two bear markets.

Why did the repo market return to the news last week? A “perfect storm” of technical factors (a planned auction of U.S. government bonds coincided with corporate tax deadlines and a bank holiday in Japan) revealed supply/demand imbalance in the repo market. As a result, the rate big Wall Street banks pay in borrowing costs shot up above the Federal Reserve’s target rate (the rate they usually pay for interbank borrowing.) Central bank intervention in the following days quickly resolved the imbalance, but not before unsettling the nerves of many on Wall Street.

The impact of these operations will grow the Fed’s balance sheet. The chart above shows Federal Reserve assets have declined in the years since quantitative easing has ended. Fed chairman Jerome Powell, during remarks in his post-rate-cut press briefing, hinted that the runoff of Fed assets and the shrinkage of excess reserves may be impacting their ability to manage liquidity in the system. If the U.S. central bank takes a more proactive approach to repo market liquidity going forward, the Fed could begin to expand its balance sheet again in line with overall currency.

May Economic Review: The worst month ever for the U.S. economy?

Worst month ever for the economy? We hope April will be the nadir, even if the recovery is likely to be fitful to start.

Retail spending falls through the floor

Retail spending plummeted by 16.4 percent for April, following a large drop from March.