Temporary jobs return, but what about permanent? 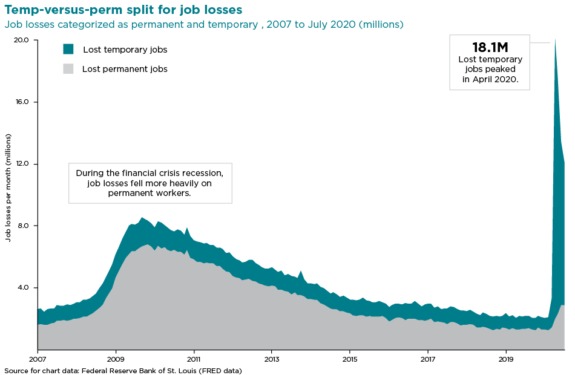 Equity investors were mildly encouraged by July’s employment report, which showed a better-than-expected increase of 1.8 million jobs for the month. Since the staggering loss of 20.5 million jobs in April, over 9 million jobs have returned, bringing the unemployment rate down to 10.2%.

The headline numbers show a steady path towards normalcy, though a deeper look at the data tells an interesting story. When job losses are split between temporary and permanent, the “shock” nature of the recent spike is clear. In April, an incredible 90% of the job losses were viewed as temporary, largely from service industries that were forced to close due to the COVID-19 pandemic. As a comparison, in the peak of unemployment during the financial crisis, 78% of the job losses was permanent while 22% was temporary.

The temporary nature of the recent job losses is resulting in a strong rebound, as many are being brought back as the economy reopens. This was accelerated by incentives built into the Paycheck Protection Program (PPP) and could be further driven by the expiration of the enhanced unemployment benefit at the end of July. It will be key for the recovery that these temporary job losses not become permanent losses. In July, nearly all the payroll growth came from the temporary category, with permanent virtually unchanged. As the reality of the challenges facing companies begins to emerge, more companies may announce permanent job cuts, which could limit the recovery and disappoint investors.