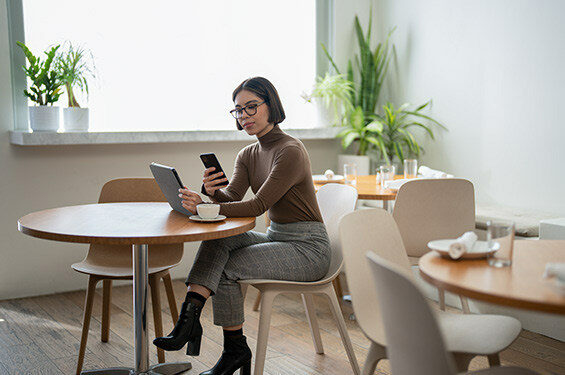 With inflation remaining persistent, Q3 earnings reports from retailers suggest that the slowing macroeconomic environment is draining the power of the U.S. consumer. However, the slowdown is not affecting all retailers, at least not yet. For example, Home Depot reiterated its full-year guidance in its Q3 earnings report but noted that customer transactions were down. Likewise, Walmart – usually a bellwether of U.S. consumer health – stated that wealthier consumers appear to be switching to their stores as inflation strains their budgets.

Overall, retailers’ quarterly reports still show signs of bloated inventories, inflation pressures, and declining consumer interest in spending on discretionary categories. At the same time, October retail sales surged 1.3% over the previous month, bolstering the idea that U.S. consumers might be doing better than expected. However, there may be an underlying trend with the U.S. consumer that the October retail sales numbers aren’t capturing. 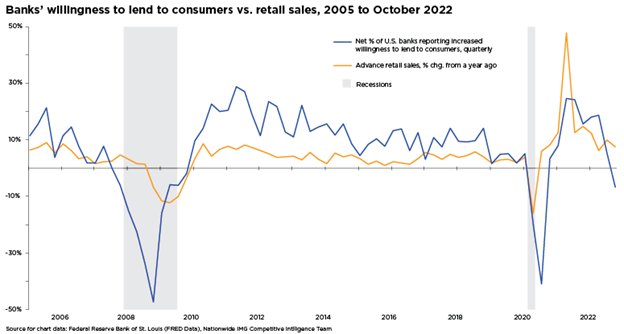 Case in point, recent data from the New York Federal Reserve indicates household debt hit a new high in Q3, rising by $351 billion to an astonishing $16.5 trillion. To put that number in perspective, U.S. household debt is four times the size of the German economy – a staggering comparison. Furthermore, household credit card debt last quarter surged 15% year-over-year, the most significant jump in over 20 years. What’s more troubling is that the average credit card’s annual percentage rate (APR) reached a new record high of 19%.

Arguably, headwinds are growing for both retail sales and consumption overall. As the Federal Reserve raises interest rates, so does the cost of credit. And consumer spending heavily relies on credit (depending on consumers’ income levels.) The chart below illustrates that banks are less willing to make consumer loans, which does not bode well for retail sales. Moreover, Target’s CEO, Brian Cornell, explained that consumer spending appeared to stall into November, as inflation-conscious consumers found fewer lower-cost options in stores and on shelves.

The contrast between that commentary and the favorable October retail sales numbers is a cautionary tale for investors in analyzing backward-looking data. With relatively strong household balance sheets (due to excess pandemic savings, etc.) and consumers locking in lower rates on large liabilities such as mortgages, consumers may be in a better position than in prior cycles to outlast inflationary pressures, thus dampening recessionary headwinds.

Investing in a highly politicized climate

Tune out political noise and focus on the fundamentals – the real driver of investment returns.