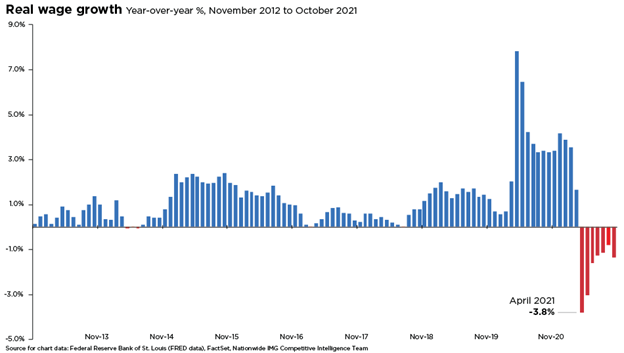 Consumer price inflation jumped to its highest level in more than 30 years in October, rising 6.2% from a year ago. Wage growth, which rose 4.9% in October over last year, is well above historic averages due to the robust job market and low labor force participation, though wage growth has failed to keep up with inflation in each of the past seven months. Food, transportation and energy are the primary drivers of the current bout of inflation, with gasoline prices up 50%, natural gas up 28%, used cars up 26% and meat, fish, and eggs up 12%. This pressure falls disproportionately on low-income consumers, with Department of Agriculture data showing the lowest-income group spent 36% of income on food, compared with just 8% for the highest-income segment.

The rapid inflation and negative real wage growth are impacting consumer confidence. The University of Michigan consumer sentiment survey fell to a decade low at 66.8, lower than October’s reading of 71.7 and a consensus estimate of 72.4. Inflation was cited as the biggest concern as expectations reached 4.9%, rising from 4.8% last month. An NBC News poll showed that 57% of Americans disapprove of President Biden’s handling of the economy and 75% rate the economy as fair (42%) or poor (33%), while 68% say the economy is worsening. Declining consumer sentiment does not historically drive deterioration in investor sentiment of consumer spending. Strong savings rates from recent months and pent-up demand for goods and services will likely keep spending elevated, but consistently high inflation could begin to impact consumer behavior, particularly for lower-income individuals.