Is the strong jobs market too hot to handle?

As the Federal Reserve continues to raise rates to save the economy from decades-high inflation, investors who are optimistic the U.S. can avoid a recession have pinned their hopes on the robust U.S. job market. After all, the unemployment rate is at a half-century low, and available jobs are near record highs. 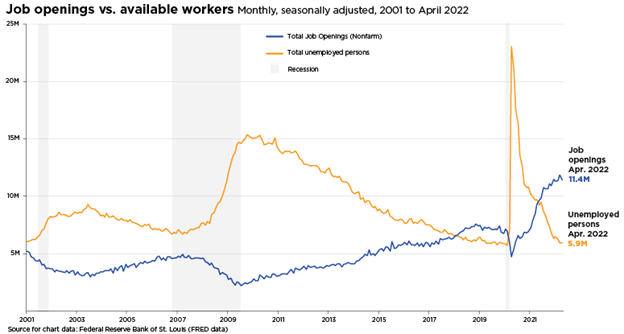 However, growing anxiety and weakening consumer confidence may undermine the bullish employment narrative as companies begin signaling hiring pauses. Historically, two of the most significant drivers of consumer spending have been how confident people are about the labor market and how wealthy they feel, i.e., the “wealth effect”. For example, many consumers believe there are plenty of quality jobs out there. Even if they lost their current jobs, many feel they would find an equally good position in short order. Nonetheless, an “economic trifecta” may begin to undermine the bullish narrative of the job market buttressing the U.S. economy: a hawkish Federal Reserve, capital market losses, and the rising costs for borrowing.

The past several years have been very unusual for the labor market, primarily due to the COVID-19 pandemic. As this week’s chart illustrates, today’s extremely tight labor market has produced almost two job openings for every one unemployed person, seemingly shifting the balance of power between employees and employers. However, with available jobs near record highs and nominal wages rising to decade highs, the Federal Reserve views the labor market as “unsustainably hot.”

Said another way, the Fed considers the abundance of jobs as helping to fuel an already surging inflation problem. With over 5 million more open jobs than unemployed workers, the Fed believes they have room to cool the labor market by increasing rates. This “cooling effect” might be apparent in the 4-week average of initial unemployment claims, which is presently at its highest level since January. So, one part of the economic trifecta shows labor market strength might be waning, diminishing the resiliency theme of the U.S. consumer.