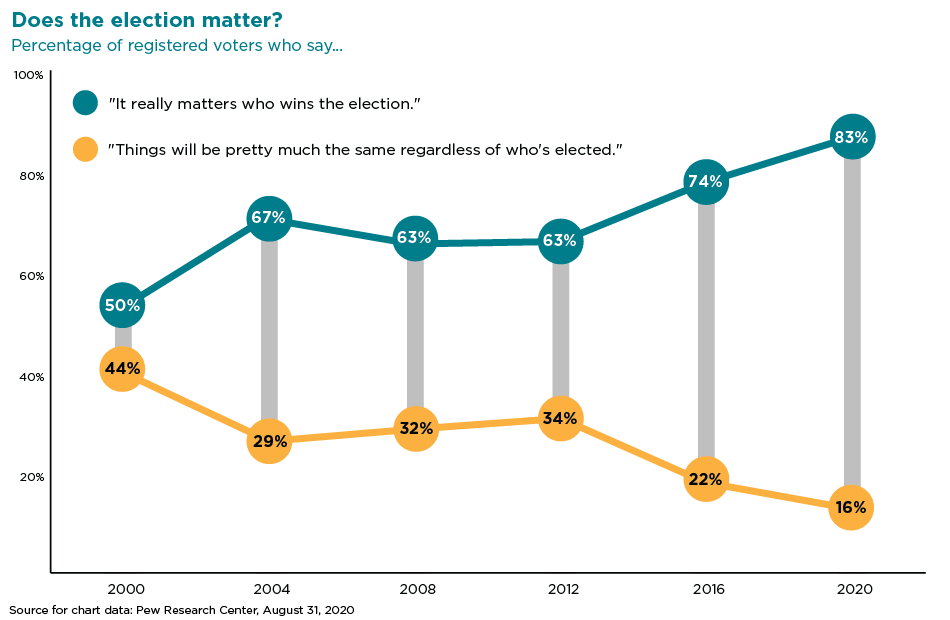 Over the past year, we’ve heard numerous times that the 2020 election would be “the most important election in our lifetime.” A recent Pew Research survey showed that a remarkable 83% of respondents said, “It really matters who wins the election,” while just 16% said “things will be pretty much the same regardless of who is elected.” Back in 2000, this split was nearly even but has steadily widened over the last 20 years.

While it’s nearly impossible to quantify whether elections actually change anything, the belief that they could clearly drove the 66% turnout for the 2020 election, the highest level of participation in 120 years.

The intense focus on last week’s election, coupled with a dramatic widening of the partisan divide is likely to impact consumer and investor confidence going forward. Following Obama’s electoral victory in 2008, there was a notable increase in consumer confidence among Democrats relative to Republicans. In 2016 after Trump’s win, there was a near mirror-image switch in relative consumer confidence, with Republicans feeling more positive and Democrats more despairing.

History shows there’s little correlation between political party control in Washington D.C. and the performance of the equity market. However, there is potential for a self-fulfilling prophesy if consumer or investor emotion influences behavior. Investing with emotion is often a drag on performance, and avoiding unnecessary whipsaws can help investors achieve the returns required for their long-term goals.