Will rising inflation derail the economy? 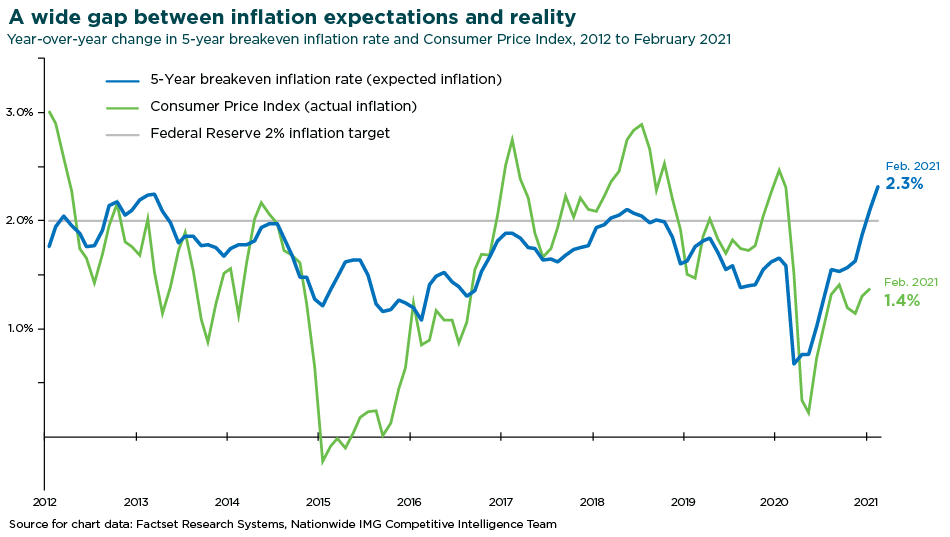 In the impressive market recovery since last March, the S&P 500® Index rallied 77%, largely in response to unprecedented monetary policy accommodation by the Federal Reserve. The FOMC cut the Fed Funds target rate to 0% on March 15, 2020 and accelerated its bond-buying program to provide liquidity and avoid a deflationary spiral. Concerns were growing that the economic shutdown and shifts in consumer behavior would keep inflation below the Fed’s 2% target. At the recent FOMC meeting, Fed Chair Powell reiterated the central bank’s commitment to a dovish monetary stance until inflation targets are achieved. The data continues to show modest inflation, with consumer price inflation (CPI) up just 1.4% from a year ago despite pressure from commodities and housing. This marked the 11th-consecutive month that CPI was below the 2% target. Since the target was first announced by the Fed in 2012, inflation has exceeded 2% in 38% of months, but only five times in the last 26 months.

Among investors’ main concerns about the continuation of the current bull market is consistent inflation pressure that would drive interest rates higher and potentially lead to a shift the Fed policy. The federal debt is currently $27.8 trillion, up $4.5 trillion from a year ago, and nearly 150% higher since the end of the financial crisis. The Biden administration is targeting $1.9 trillion in stimulus spending and $2.0 trillion in infrastructure spending, which along with the forecast deficit could drive the debt to $34 trillion. Investors have substantially recalibrated their expectations for inflation, with the 5-year breakeven inflation rate showing expected inflation of 2.3%, the highest level since 2012. (See chart above.) The breakeven rate is the best way to measure investors’ expectations of future inflation. By comparing the yields on the 5-year Treasury and 5-year Treasury inflation-protected securities (TIPS), the breakeven rate essentially derives a market-based measure of expected inflation over the next five years. At this point, reality has not met expectations, but if inflation rises materially, interest rates could rise and equity valuations would likely suffer.

How is inflation impacting the consumer? (Podcast): Nationwide Market Insights