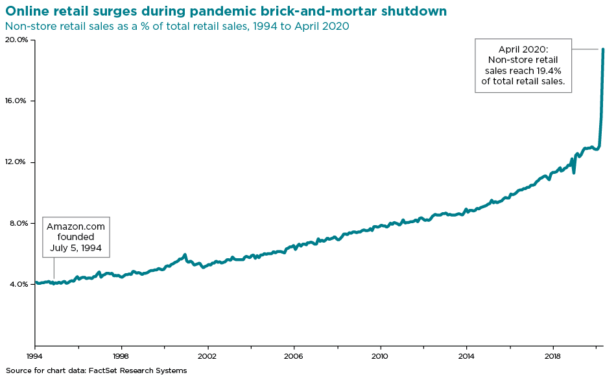 The only retail sales category (one out of 13) that didn’t decline was non-store retail, growing 8% in April over the previous month. The shift from brick-and-mortar retail to online shopping has been steady over the last two decades, but has accelerated in recent months as physical stores in many states were forced to close temporarily as part of COVID-19 shutdowns. Non-store sales as a percentage of total retail sales reached 19% in April, up significantly from 13% in December 2019.

You only need to look at the recent fortunes of several retail giants to assess how the landscape is changing. Amazon (a 20 year-old company) saw a 26% sales increase in Q1. Meanwhile, J.C. Penney (nearly 120 years old) filed for bankruptcy on Friday, May 15. That announcement followed two other bankruptcies of old-school retailers Neiman Marcus and J. Crew. Once the economy reopens, traditional stores will likely regain some share, though many consumer habits learned during the COVID-19 outbreak may persist indefinitely.