A notable trend underlying overall stock market performance so far this year has been the substantial outperformance of value indexes relative to growth. This relationship has been a constant topic of conversation since the financial crisis of 2008-09, which is when a historic performance gap began to accelerate. From January 2017 through last November, the Russell 1000® Growth Index outgained the Russell 1000® Value Index by nearly 100%, driven by tremendous performance from the seven largest growth holdings: Apple, Microsoft, Amazon, Tesla, Facebook/Meta, Google/Alphabet and Nvidia. Those seven firms accounted for 44% of the overall Russell 1000 Growth Index at the end of 2021.

This outperformance has created significant multiple expansion, with the relative valuation between the Russell 1000 Growth and Value indexes growing from 1.2-times to 1.8-times earnings. The sharp move in interest rates we have seen early in 2022 has disproportionately impacted high-multiple stocks, resulting in a 7% performance gap in favor of value since January 1. There was a similar period of outperformance to begin 2021, but investors eventually returned to the “comfort blanket” of large-cap technology stocks in the second half of the year. 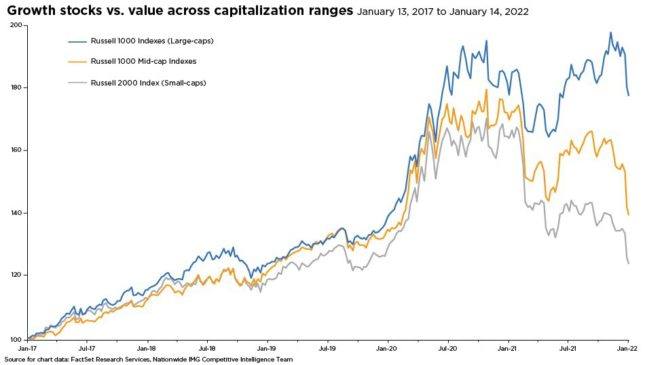 The chart above illustrates the impact of the largest Russell 1000 Growth companies, as the growth/value relationship in mid-and small-cap stocks is substantially different. The three capitalization ranges performed very similarly through the bear market and initial recovery surrounding the pandemic, but the lines have drastically diverged over the past 18 months. Since May 2020, large-cap growth has outperformed large-cap value by 15%, while value outperformed by 18% in mid-caps and 27% in small-caps. Through the five-year period, growth has outperformed by a cumulative 78% in large-caps, 39% in mid-caps, and 24% in small-caps. Given these persistent valuation gaps, a convergence in performance is likely to continue.

Total home sales are down for a fourth straight month.