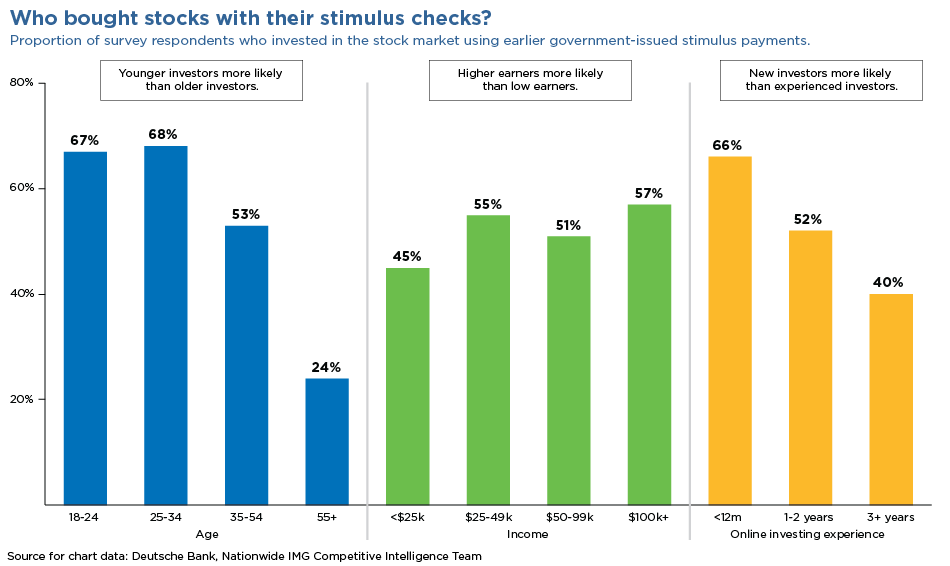 The emergence of the retail trader has attracted notable attention in 2021, highlighted by the battle waged by the Reddit “wallstreetbets” community against some prominent hedge funds in January. Retail traders opened an estimated 10 million new accounts in 2020, sparked by a combination of zero-cost trading commissions, an excess of lockdown free time and government stimulus checks. This is a significant shift from the previous decade, when retail investors largely avoided the equity market. As Congress finalizes a stimulus bill that will send payments of $1,400 to certain individuals, many will likely choose to invest that money in the market.

A Deutsche Bank survey attempted to measure how likely it may be for individuals receiving stimulus payments to invest some or all of their $1,400. Not surprisingly, the survey showed younger people were more likely than older people to have used earlier rounds of stimulus to buy equities; roughly 68% of those younger than 35 said they invested their stimulus payment in stocks versus just 24% of those above 55 years old. The pattern was less clear by income; 46% of those earning less than $25,000 bought stocks with their earlier stimulus checks, versus 57% of those earning more than $100,000.

Finally, the phenomenon of new investors entering the market was clear; 66% of those with less than 12 months of online investing experience used stimulus funds to invest in stocks. The increased participation of retail investors is encouraging, as it could jump-start their willingness to invest for the future. But it will be important to monitor their behavior in periods of market stress to gauge their long-term commitment and resilience.